The fall is gonna kill you*

I’m a day late to the game on this. Jared Bernstein, Dean Baker, and Paul Krugman have all already sounded the alarm as to Robert Samuelson’s piece declaring social security unrecognizable to FDR and a significant part of what’s going to bankrupt us. I can’t add anything to the excellent responses already mentioned in terms of facts.

I can make charts, though. So  hopped on over to the CBO for their data on the long term budget outlook. Here’s how things look in the Alternative Fiscal Scenario, when Congress and the President do everything in their power to break the country: 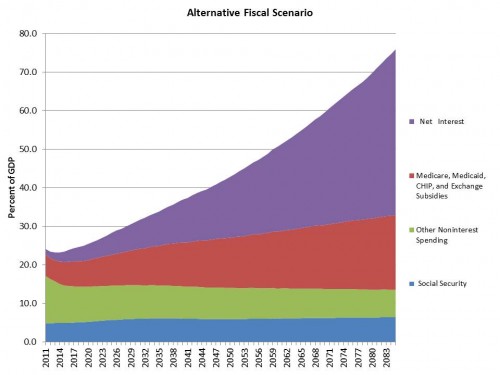 So what do we have here? Well, interest on the debt is horrific, because we extend tax cuts and refuse to do anything about health care spending, leading to increasing deficits. But I’d like you to notice two things. The first is that for all the complaints about discretionary spending (green), it’s pretty stable over the next 75 years. The second thing is social security. Does it look like it will be the thing that drives us off the cliff?

But let’s say we wise up. We increase revenue, we stop with the doc fix nonsense, etc. Then we have the Extended Baseline. Please note that this involves no social security reforms at all: 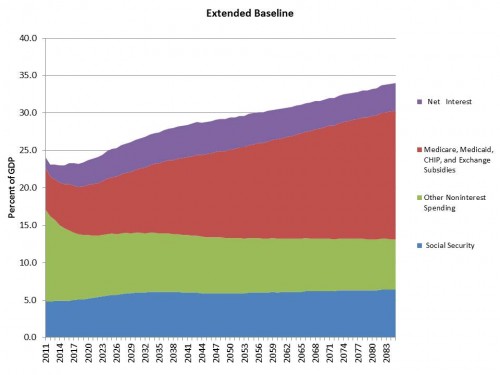 Interest is much better, because revenue is up and overall spending goes down. Still – discretionary spending stabilizes. And social security isn’t nearly the budget buster some would have us believe.

We can stand on the edge of the cliff, look over the edge, and worry that social security is going to doom us. But that’s silly. It’s health care. That’s what’s gonna kill us.

*Bonus points if you got the West Wing reference

UPDATE: for the purists who demand that every slide have the same axes regardless of the message or content (yes, I’m having a frustrating day), here’s the first chart with the same y-axis: 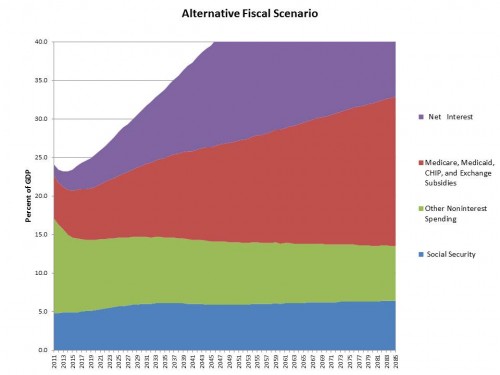