Everyone knows health care costs too much. When I talk about this, especially on the radio, people call in to try and pin that entirely on individual choices. It’s always someone else’s fault. I’ve often resisted that train of thought, because many of the factors people pick (smoking, drinking, etc.) are actually stacked in favor of making the US cheaper than many other countries. But that doesn’t mean that the system wouldn’t cost less if we could fix some of these things.

How much do those factors actually cost? A recent study published in Health Affairs gets at that question. “Ten Modifiable Health Risk Factors Are Linked To More Than One-Fifth Of Employer-Employee Health Care Spending“:

An underlying premise of the Affordable Care Act provisions that encourage employers to adopt health promotion programs is an association between workers’ modifiable health risks and increased health care costs. Employers, consultants, and vendors have cited risk-cost estimates developed in the 1990s and wondered whether they still hold true. Examining ten of these common health risk factors in a working population, we found that similar relationships between such risks and total medical costs documented in a widely cited study published in 1998 still hold. Based on our sample of 92,486 employees at seven organizations over an average of three years, $82,072,456, or 22.4 percent, of the $366,373,301 spent annually by the seven employers and their employees in the study was attributed to the ten risk factors studied. This amount was similar to almost a quarter of spending linked to risk factors (24.9 percent) in the 1998 study. High risk for depression remained most strongly associated with increased per capita annual medical spending (48 percent, or $2,184, higher). High blood glucose, high blood pressure, and obesity were strongly related to increased health care costs (31.8 percent, 31.6 percent, and 27.4 percent higher, respectively), as were tobacco use, physical inactivity, and high stress. These findings indicate ongoing opportunities for well-designed and properly targeted employer-sponsored health promotion programs to produce substantial savings.

This study teased out the added cost of “modifiable” factors including stress, smoking, obesity, physical inactivity, depression, hypertension, high blood glucose, high cholesterol, and poor eating habits. This is what they found: 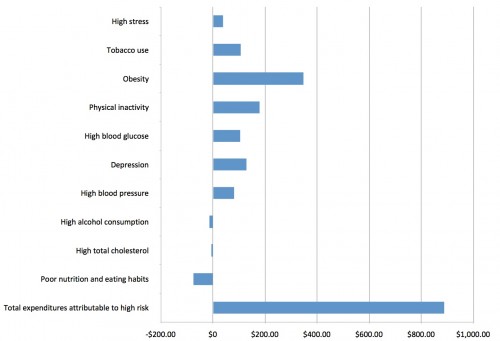 The authors estimate that, overall, these risk factors account for over $880 per person, or more than 20% of all employer health care costs. That’s not insignificant. Moreover, some risk factors are much more expensive than others. Employers with high blood glucose (diabetes) cost about 32% more than those without. Those with high blood pressure also  cost 32%more and those with obesity cost 27% more.

This is a great opportunity for me to clarify a distinction I’ve been trying to make for some time. Obesity, tobacco use, high blood pressure – these are things that effect people all over the world. Therefore, I sometimes caution people who think that the relatively high cost of care in the US is due solely to these factors. That doesn’t mean, though, that these factors don’t add money to our bill, and that fixing them might not make things cheaper for employers. Fixing them would also make employees healthier.