Some interesting statistics in an AMA News report on the use of midlevel practitioners in medical practices:

Almost one in two office-based physicians works in a practice that includes physician assistants, nurse practitioners and/or certified nurse midwives. And that number is expected to go up.

The Centers for Disease Control and Prevention’s National Center for Health Statistics reported in an Aug. 17 data brief that 49% of physicians working in office settings have the practitioners on board. The most likely to work with them: doctors age 54 and younger, those in large groups and those serving a large Medicaid population…

“We know that more practices are relying on midlevel providers because of increasing demand for health care services,” said Melissa Park, MPH, lead author of the report and an NCHS researcher. “The demand is just going to increase in the years to come.”

Among the reasons are increasing physician shortages as health care demand goes up, a need to fill in for residents with restricted work hours, and further consolidation of practices into larger groups as a result of health system reform.

Midlevel practitioners are often attractive alternatives* to physicians because they take less time to train, and often cost less to employ. The AMA has, at times, opposed their practicing without supervision, but supported their work as part of doctor-led care teams. Unless we significantly increase the number of doctors in the US, though, I’m not sure that the AMA is going to have much of the choice. Especially if this trend continues: 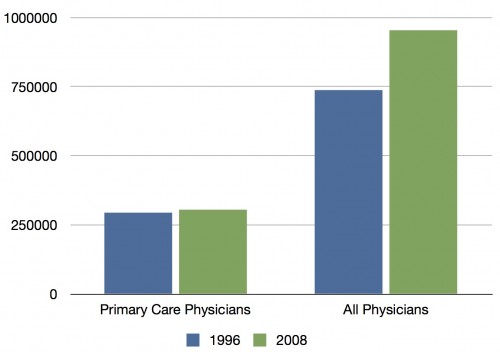 *Full disclosure, my wife is a pediatric primary care nurse practitioner, and she rocks.