In a study released today, we* model the US market expected net present values for six common bacterial infections from two perspectives: the company (private) and society. The private eNPVs were small, with negative results within the error bars: 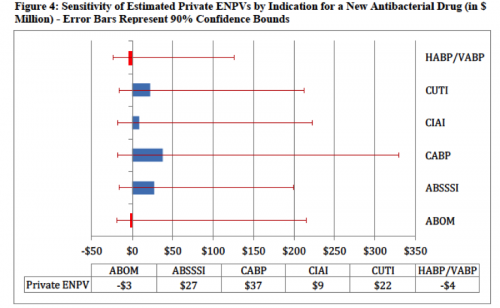 We also model the social value of antibiotics for these six conditions: 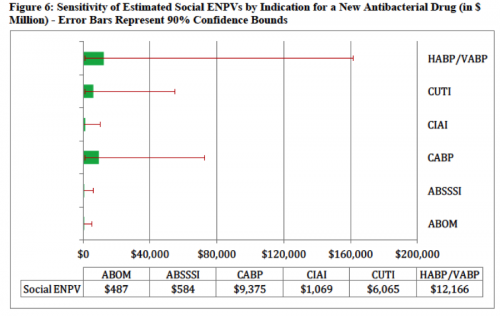 These numbers are larger for several conditions, showing societal benefits in the billions of dollars in the US. We didn’t model MRSA, CRE, TB, gonorrhea or a host of other drug-resistant pathogens.

The contrast between public and private eNPVs is striking. For example, an antibiotic that effectively treated hospital and ventilator associated bacterial pneumonia (HABP/VABP) could be worth over $12 billion to society but only negative $4 million to the company contemplating a research program. That sounds like a broken market.

Two other issues that discourage research:  First, the error bars are large, indicating the significant uncertainty in antibiotic markets. Companies typically look for risk premiums, not discounts. Second, all antibiotics must be carefully used to slow the development of resistance, but these stewardship programs further dampen the sales prospects for new drugs. This is entirely appropriate from a health perspective, but aggravates the mismatch between public and private values.

We also examined potential incentives, but I’ll save that for tomorrow.

*Authors are Sertkaya, Eyraud, Birkenbach, Franz, Ackerley, Overton and Outterson, under contract to DHHS/ASPE and FDA.