As I noted in my last post, former Indiana Governor and Senator Evan Bayh argues that a 2.3% excise tax on medical devices poses a serious threat to a valuable industry. Is he right? I don’t believe so.

Alec MacGillis and the editors of Bloomberg View run down several reasons to believe that the tax is reasonable and justified. Given inelastic demand and a reasonably competitive industry, most of this tax will be passed on to patients and to payers.

There’s a more direct way to test these claims, too. One can examine the financial reports and changing stock price of the companies in question to see what investors believe about the financial consequences of health reform.

The graph below compares the Dow Jones Medical Device Index (the thick blue line) against the overall Dow Jones Industrial Average (the thin purple one) from 2007 to today: 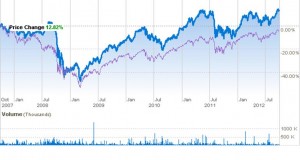 This is a vibrant industry. Its stock prices move up and down. There’s no reason to believe its prospects have been deeply damaged by health reform.

We can look even more closely at these issues by examining how medical device company stocks moved on specific days we received pertinent information on the political or legal prospects of health reform.

On Bayh’s argument, the Affordable Care Act is a real danger to the medical device industry. This leads to the hypothesis that medical device company stocks should jump on days that health reform appeared in jeopardy, and that these same stocks should decline on days in which ACA received an unexpected boost.

Now you might reasonably ask—why would a stock jump in one day because of one court decision? It happens. Here, for example, is what happened with Aetna—a company that actually was intimately affected by ACA—in late March when sharp Supreme Court argument led expert observers to believe ACA might well be overturned (The Atlantic’s Matthew O’Brien deserves credit here):

What about medical device companies? Bayh’s op-ed mentions two publicly-traded companies that have Indiana ties: Stryker and Hill-Rom. What happened to their stock prices on these same days?

As you can see, e.g, clicking here…. not much seemed to have happened. Hill-Rom slightly declined. Stryker slightly increased in line with the Dow Jones industrial average. If health reform was damaging these companies, their investors don’t seem to know it. 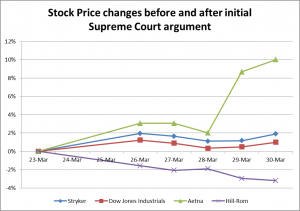 What about in late June, when Justice Roberts surprised many people by casting the deciding vote to uphold ACA? 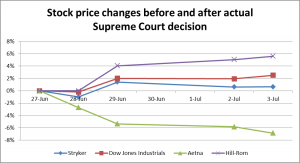 Once again—surprise information about the fate of health care reform seemed to have minimal impact on investors’ views of these medical device companies. Aetna’s stock fell quite a bit. If anything, the device-makers’ stocks slightly increased in value.

I scanned financial analysts’ views of health reform’s business impact on medical device companies. The attached Morningside video analysis was conducted in February 2010. The analyst overall guessed an overall neutral, slightly-negative impact on the medical device industry. She argued that this specific tax produced a maximum impact of  5-10% reduction in firms’ bottom lines. That’s not trivial. It’s not a mortal threat, either.

I didn’t see much on the excise tax within Stryker’s annual report materials. Other issues, such as FDA warning letters, received greater weight. Hill-Rom’s 2011 report seemed to echo the Morningstar video. It noted the possibility that the firm will be harmed by the 2.3% tax, but the firm seems much more worried about other things:

[T] he impact of the [medical device] tax, coupled with reform associated payment reductions to Medicare and Medicaid reimbursement (discussed below) could have a material adverse impact on our business, results of operations and cash flows.

Changes in Medicare, Medicaid and other governmental medical programs could reduce the reimbursement we receive for our products and services. Medicare, Medicaid and managed care organizations are increasing pressure to both control health care utilization and to limit reimbursement. Changes in reimbursement programs or their regulations, including retroactive and prospective rate and coverage criteria changes, competitive bidding for certain products and services, and other changes intended to reduce the program expenditures, could adversely affect our businesses dependent on third-party reimbursement. In addition, changes to the mix of our customers’ patients among Medicare, Medicaid, third-party and private payor categories, increases in case management, and the review of services or reductions in coverage or reimbursement rates may negatively impact our profitability to the extent such changes place downward pressure on the utilization or pricing of our products.

The last paragraph gets to the real issue likely to face these firms. Medicare and Medicaid could pay markedly less for medical devices if these programs bargained with greater gusto, and if they more-aggressively implemented practices such as competitive bidding. Such steps would have a much more substantial impact on these firms than a 2.3% tax will do.

Debate over these measures will also provide a put-up or shut-up moment for self-avowed fiscal conservatives. Many legislators will be forced to decide whether to support painful policies that actually control Medicare costs, or whether, instead, to support constituencies and interest groups that have powerful reasons to oppose these measures.

That’s the real fight the industry knows is coming. In fact, this fight will take place whatever happens to health reform. As costs increase, public and private payors will inevitably seek more powerful methods of cost control. Mechanisms such as the Independent Payment Advisory Board (IPAB) are coming into view that might help advance this goal.

These will be tough fights. I don’t know how they will turn out. One thing seems certain: I expect many alarmist op-eds by Evan Bayh along the way.