Loren Adler and Paul Ginsburg, both of the Brookings Institution, have published a fascinating new post on the Health Affairs blog, examining the impact of the Affordable Care Act on individual market premiums. Loren’s a personal friend, so I happen to know that this isn’t a typical blog post; this analysis has been in process for several months.

Their central finding is that average premiums in the individual market would likely be higher absent the health reform law.

To address this issue, we draw on Congressional Budget Office estimates of average individual market premiums in 2009 (the most recent pre-ACA year for which CBO provides an estimate), largely based on data from the Medical Expenditure Panel Survey (MEPS) and adjusted for insights from their Health Insurance Simulation Model and observed data. We then adjust this estimate downward to account for it being based on pre-2009 data, by the ratio of actual 2009 employer-provided plan premiums for single coverage (from MEPS) to CBO’s predictions at the time.

Therefore, we estimate that the average annual premium in the individual market in 2009 was $3,480 (or $290 per month), which was for a plan that on average covered roughly 60 percent of an enrollee’s covered health expenses — an actuarial value of 60 percent.

By comparison, the average premium in 2014 for the SLS plan was $3,800according to CBO, only 9 percent higher despite the passage of five years. Adjusting for the difference in actuarial value, this premium was actually lower in nominal dollars than that in 2009.

Moreover, by any measure, individual market premiums had grown enough by 2013 such that the $3,800 average SLS plan premium in 2014 represented a sharp drop from the previous year, despite covering a higher percentage of enrollee costs and offering a broader set of health benefits.

Another key takeaway is that average post-ACA premiums are lower than we would expect average individual market premiums to be in the land of counterfactuals, where the ACA was never acted. This remained true under conservative assumptions. 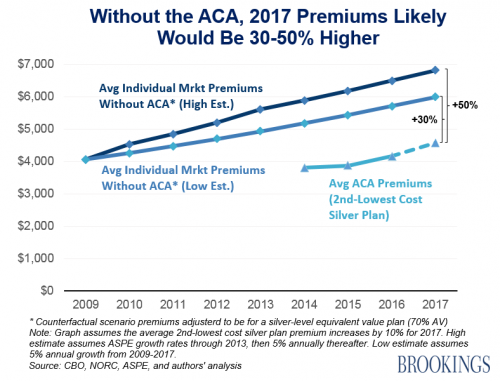 I strongly recommend reading the post in full, especially given how counterintuitive the findings seem; conventional wisdom has long held that the ACA increased individual market premiums simply as a function of benefit generosity and guaranteed issue. Importantly, their analysis is uses up-front premium estimates, before accounting for premium tax credits and cost-sharing reductions.

For those who remain skeptical, Loren walked through some plausible explanations on Twitter (click through, as this goes on for several more tweets):

To be clear, the post deals in averages; there is variation around the mean, and the variation pre-ACA would have been much higher pre-ACA than post, because of the new community rating and 3:1 age band. The available data also couldn’t be used to evaluate changes to cost-sharing design (like deductible size) or provider networks. Data on pre-ACA individual market coverage is notoriously difficult to come by; this analysis uses CBO data (which hasn’t been widely used outside CBO for analyses like this), supplemented by information from MEPS.

Even with these caveats, the analysis offers surprising, new, and important information. Go read it!