From Predicting time to readmission in patients with recent histories of recurrent psychiatric hospitalization: a matched-control survival analysis, by Schmutte, Dunn, and Sledge:

Reducing readmission rates among adults with histories of frequent hospitalizations remains challenging (Gerolamo, 2004; Montgomery and Kirkpatrick, 2002); however, a recent study did find that for adults with schizophrenia and histories of frequent inpatient stays (i.e., 4 or more previous hospitalizations), receipt of outpatient aftercare interventions that focused on symptom education, care continuity, and daily structure was associated with fewer readmissions within 3 months (Prince, 2006). On the other hand, there is evidence that helping patients find and maintain employment is associated with reduced hospitalizations (Burns et al., 2009; Drake et al., 1996; Henry et al., 2004). […]

Despite multiple clinical and demographic differences between adults with and without recent histories of recurrent hospitalizations at the time of index hospitalization, only unemployment and living in supervised residential living facilities predicted shorter time-to-readmission within 12 months of hospital discharge after controlling for prior hospitalizations. Unemployment and residential living status were not associated with psychosis or moderated by illness severity or comorbid substance use. These results suggest that early psychiatric readmission may be more influenced by residential and employment status than by severe mental illness.

From Predictors of Rehospitalization in High-Utilizing Patients in the VA Psychiatric Medical System, by Bowersox, Saunders, and Berger:

One consistent finding is the relationship between past inpatient psychiatric admission and future readmission, with patients who have received inpatient care in the past being more likely to be readmitted for future inpatient care [6, 7]. Investigation into other factors such as self-reported patient symptoms [8] and diagnosis [3, 9] have yielded inconsistent results, causing some researchers to suggest that future approaches to this question should focus on treatment-related factors such as treatment adherence and continuity of care rather than demographic or clinical characteristics alone [10]. […] 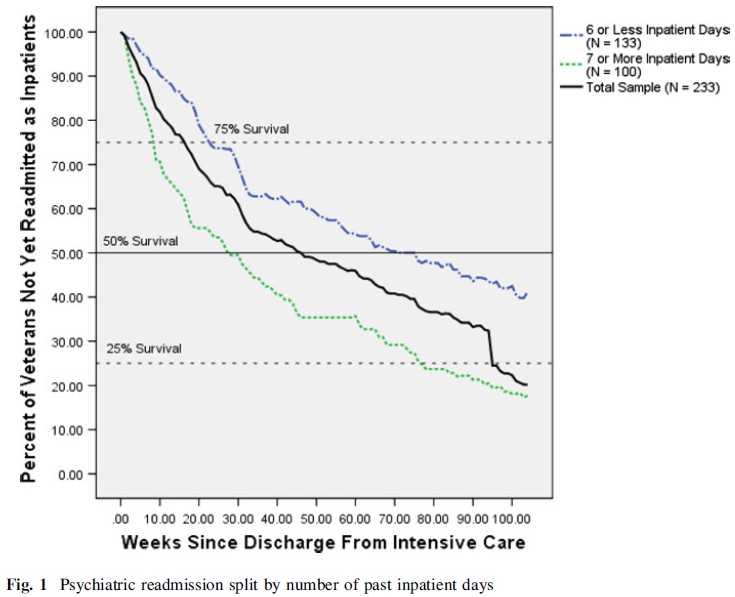 Some cohort- and register-based studies that focused on psychiatric diagnoses as possible predictors of psychiatric readmission found increased readmission rates to be associated with a diagnosis of psychosis or personality disorder (6) or an affective disorder (7). Co-occurring disorders, in particular a substance use disorder and schizophrenia, have been found in some studies (8,9) but not in others (7) to increase the risk of readmission. […]

From Effectiveness of Peer Support in Reducing Readmissions of Persons With Multiple Psychiatric Hospitalizations, by Sledge et al.:

Methods: A randomized controlled design was used, with follow-up at nine months after an index discharge from an academically affiliated psychiatric hospital. Patients were 18 years or older with major mental illness and had been hospitalized three or more times in the prior 18 months. Seventy-four patients were recruited, randomly assigned to usual care (N=36) or to a peer mentor plus usual care (N=38), and assessed at nine months.

Conclusions: Despite the study’s limitations, findings suggest that use of peer mentors is a promising intervention for reducing recurrent psychiatric hospitalizations for patients at risk of readmission.