Risk adjustment in the ACA marketplaces: A success with some important gaps

This post was coauthored by Michael Geruso, Timothy Layton, and Daniel Prinz. Michael Geruso is an Assistant Professor of Economics at the University of Texas at Austin. Timothy Layton is an Assistant Professor of Health Care Policy at Harvard Medical School. Daniel Prinz is a PhD student in Health Policy and Economics at Harvard University.

With so much attention in recent months on potential changes to the ACA’s provisions for Medicaid and consumer subsidies, it is easy to overlook some of the most important innovations introduced into the individual markets by the ACA: risk adjustment and reinsurance. The functioning of risk adjustment and reinsurance are un-sexy, behind the scenes, technical matters, but these regulations are crucial to protecting consumers with pre-existing conditions in a competitive insurance market. Premium discrimination and guaranteed renewability tend to attract the most popular attention in terms of non-discrimination, but enforcing a policy of non-discrimination against the chronically ill would be difficult or impossible without risk adjustment.[1]

In a recent paper, we evaluate how well risk adjustment and reinsurance perform in eliminating the incentive to avoid sick patients in the ACA Marketplaces. To do so, we look at drug formulary design. If insurers assign certain drugs to high cost sharing tiers, it may be a signal that plans are attempting to avoid the patients who demand those drugs. Using the risk adjustment and reinsurance algorithms from HHS, we simulate profitability at the patient level by subtracting patient claims costs from the simulated revenue (which incorporates premiums plus risk adjustment and reinsurance transfers). We then group patients into categories defined by standard therapeutic classes of drugs. For the vast majority of drug classes, our work shows that risk adjustment and reinsurance neutralize selection incentives: an insurer who attracts this particular group does not benefit or lose disproportionately relative to insurers who avoid the group. This is a big win for the ACA, in that these policies seem to largely counteract one of the primary downsides to bans on premium discrimination: generating large profitability differentials between sick and healthy enrollees.

However, we also show that a few drug classes are still associated with consumer types that exhibit significant unprofitability. This means that an insurer would want to avoid patients who demand these classes of medications. 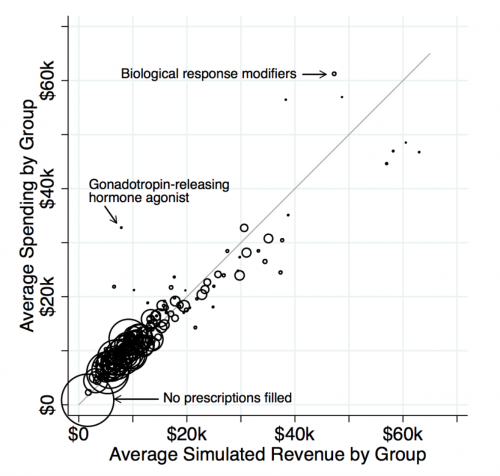 While this reveals some shortcomings to the ACA risk adjustment system, it also allows us to test an important question: Absent risk adjustment and reinsurance, would insurers actually design drug formularies that are more restrictive for the unprofitable groups? To answer this question, we effectively compare formulary restrictiveness for drugs in classes where costs greatly exceed revenues (the dots far above the 45-degree line in the figure above) to restrictiveness for drugs in classes where costs and revenues match relatively closely (the dots on the 45-degree line).

We find that formularies are much more restrictive for the drugs for which individual-level costs exceed individual-level revenues. This includes drugs treating multiple sclerosis, substance abuse disorders, and infertility in women. The contrast is even sharper for more popular drugs that are likely to be more salient to sick consumers when choosing between plans. The relationship holds even when narrowly comparing classes that differ in net profitability but have similar associated drug and medical costs. (Think of comparing the cost sharing assigned to drug classes within a horizontal slice of the figure.)

What should we take away from this? Detractors of the law have misapplied our findings by asserting that because some patient types are undercompensated by the risk adjustment, the ACA has hurt these groups. There are a number of problems with this argument. First, for this reasoning to be sound individuals taking these drugs would have had to have access to plans with better coverage for these drugs prior to the ACA. This seems unlikely. Many of these individuals have severe chronic conditions that may have disqualified them entirely from purchasing health insurance. Additionally, if they did have access to good coverage for drugs, they were charged exorbitantly high prices for that coverage, generating massive “reclassification risk,” another name for the risk of getting one of these chronic conditions and having your premiums shoot through the roof. Second, this argument ignores the fact that the risk adjustment and reinsurance policies in the ACA in fact seem to be working quite well overall at matching revenues to costs and thereby protecting consumers from the types of perverse contract designs meant to avoid sick consumers.

The takeaway from our study is not that the ACA leads to discriminatory contracts, but that it accomplished the difficult goal of incentivizing insurers to provide high-quality coverage for the vast majority of drug classes. The risk adjustment and reinsurance policies can (and should) be improved to adequately compensate for a small minority of individuals taking drugs in a few outlier classes. The answer is to make the necessary incremental improvements to the policies, not to scrap the ACA entirely with its important and widely popular limits on premium discrimination.[2] As the individual markets continue to evolve, it is important to keep in mind that the only way to guarantee good coverage for the chronically ill is to get the insurer incentives right via tools like reinsurance and risk adjustment.

[1] Even with EHBs and prohibitions on risk-rating, insurers may be able to effectively discriminate through benefit design; furthermore, competition pressures insurers to do this, whether they “want to” or not. If one insurer limits access to an expensive therapy while another chooses to provide easy access to the same drugs, the discriminatory insurer will accrue healthy individuals while the non-discriminatory insurer enrolls more of the sick, driving up its costs—adverse selection potentially leading to a death spiral. Nominally outlawing discrimination could do little in practice to prevent such dynamics. Though risk adjustment doesn’t force insurers to cover services that attract sick enrollees, it makes sick enrollees equally profitable to healthy ones by using transfer payments to decouple health from profitability. For this reason, risk adjustment is ubiquitous in most market settings in the world in which private insurance carriers compete to attract enrollees, including Medicare Parts C and D, and many privatized state Medicaid programs.

[2] As we discuss in other work (here and here), an important part of the incremental improvements may be to revive the reinsurance program in some form, which ended in 2016.