I wrote before that residency is already terrible, and reducing the pay to zero isn’t a good idea. I’m not arguing, however, that the primary care shortage isn’t a problem worth addressing. We don’t have enough primary care docs. We need more. I don’t think, however, that focusing on educational costs will change that.*

I think that many physicians use educational costs as a defense to explain away their decision to choose specialty care over primary care. Look, I absolutely sympathize with the idea that education costs too much. But I’m not convinced this problem is confined to medicine. Look at this chart I made from data from a McKinsey & Company paper: 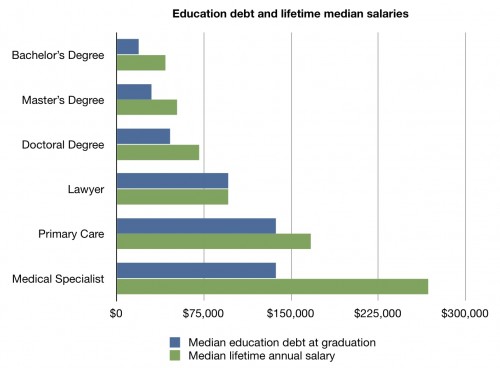 The blue bars are the median educational debt at graduation for various degrees and career paths. The green bars are the median lifetime annual salaries for the same. Now, the reason that people take on educational debt is because they think it pays off in terms of increased salaries. It does. In general, more debt equates with higher salaries. But how much more is enough? All professionals invest in their careers. Primary care docs, according to these data, don’t seem to invest much more proportionally than others.

A better question is why specialists make so much more, even in relationship to their debt. That seems like much more of a discrepancy compared to primary care than the cost of medical education is to other fields. Let’s say I make all education free. And now the world looks like this: 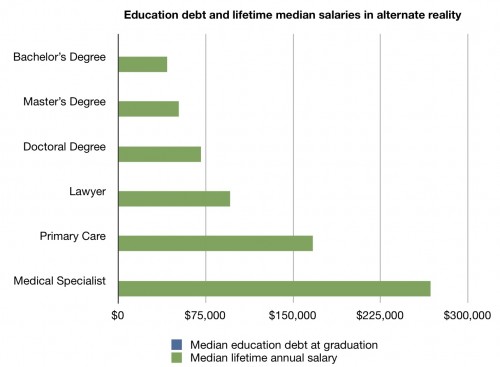 Does anyone think that there’s still not a huge monetary incentive for physicians to become specialists? Education debt is not the issue.

I also think people trivialize the choice between primary care and specialty care. One of the reasons I became a pediatrician is that I didn’t enjoy other specialties. I wanted to be a pediatrician. My father (now retired) was a general and thoracic surgeon, was triple-boarded in critical care, and ran a trauma unit. There’s not enough money in the world to make me want that job. Being a cardiologist is not the same as being an anesthesiologist, nor the same as being a family physician. Those are entirely different jobs, attract entirely different people, and no one will make the jump for a few thousand, or even tens of thousands of dollars a year. You might as well ask them to be a lawyer.

So if you want more primary care docs and less specialists, I think it’s a mistake to focus on educational costs. It doesn’t appear to be the real problem that many say it is, and I don’t think it will have the driving power necessary to make people change their career goals.  If we want real structural change, we need to make real structural change. We need somehow to increase the number of primary care jobs without increasing the number of specialty jobs. That will require some finesse, not a reduction in educational debt burden.

*None of his should be taken to mean I don’t think that the cost of education isn’t ridiculous. It is, and that cost is likely scaring away many who would be excellent physicians. I think that’s why education in general should be cheaper, if not free, not because salaries aren’t high enough.