I am grateful for the feedback I’ve already received about obstructive sleep apnea. (All prior posts on this topic are appropriately tagged.) Below are a few things I’ve heard and some additional, related information I dug up. I am going to presume anyone reading this will know what the acronyms and other jargon mean (if not, Google is your friend).

Disclaimer: In no case should you assume my evidence review has been thorough. I’m still cutting my way through the thicket here. None of this is clinical advice. I have a PhD only, anyway (not that there’s anything wrong with that).

1. CPAP > MAD. The most common feedback I received was to encourage me to go right to CPAP, skipping MADs. Some suggest this because the evidence shows that CPAP has better outcomes. This is true! See the ICER report and the AHRQ report that it updates.

However, it’s not that MADs are ineffective. Here’s a recent review that has come out since either of these reports that makes that point. Here’s another one. Notice that MADs aren’t worse on all measures.

An important consideration is that, as with any treatment, clinical effectiveness (as demonstrated in trials) isn’t the only variable. According to some studies, CPAP has lower adherence, which suggests there are things about it that some patients don’t like, relative to MADs. CPAP machines are also more difficult to travel with (particularly when backpacking or to locations without power). I am especially concerned about how either device will play with my fragile sleep profile (easily awakened by noise or discomfort). That could go either way. MADs are silent, but could be uncomfortable. CPAP machines make some noise (I need to hear some to appreciate how much) and also must impact comfort somewhat.

But, MADs can break. I haven’t seen relative failure rates of them vs CPAPs, but I’m willing to believe MADs fail more often. Breakage of one is why one respondent switched to a CPAP machine, though he also said that what insurance would cover played a role in this decision too. It’s potentially meaningful that I’ve yet to hear from a single patient who prefers MADs. But, not everyone who responded has tried both. Some have. Some admitted they haven’t. I suspect CPAP is just more common, perhaps a consequence of coverage (?).

Another critique of MADs is that they can cause jaw pain. True! But at least one study shows that doing jaw exercises can help with this. Clearly MADs are going to affect one’s bite and teeth more than CPAPs. On the other hand — and I’ve done zero work chasing this down — I have seen some anecdotes about CPAPs associated with ENT issues.

Also, and again I have not chased this down, I saw something about the possibility of CPAPs potentially causing a progression from obstructive sleep apnea to central sleep apnea. I guess that might make sense if the brain starts to learn it doesn’t need to do any work in keeping the airway open, but this could also be internet BS (?).

Given these other considerations, it might be reasonable to trade the lower effectiveness of a MAD for higher comfort or convenience if it provides those (for an individual patient). Ideally, a patient would try both. Over time, many do. And I may be one of them.

2. Don’t use Ambien. One respondent said this was not an OSA solution. Clearly I know that. Its purpose, in my case, would be to address short-term, OSA-exacerbated insomnia issues until I get a longer-term (and proper!) OSA device. (If you’re just joining me, yes, I know all about CBT for insomnia.)

One respondent said it or benzodiazepines were associated with future dementia. First of all, association studies — let’s be careful. Second of all, there are studies that say otherwise. Third of all, risk vs. benefit. Forth of all, short-term use. Enough about this.

3. Sleep position matters. A friend made the point (implied it, but I still have enough wit to make the inference) that OSA is a mechanical issue and is addressed with mechanical solutions. This being a physical world, I am free to experiment with various mechanical solutions on my own, as I wait for the real deal.

For obstructive sleep apnea, the issue is that the tongue is blocking the airway. In part that is (or could be?) because the airway has lost some muscle tone or resiliency of some sort (I’ve yet to internalize all the clinical jargon). But gravity also plays a role. For most sleep positions, and especially supine (on one’s back), the tongue is pulled down into the airway by gravity. Stupid gravity.

I can still remember my physics well enough to reason that the effect of gravity on the tongue would be the opposite (away from the airway) in a prone (on the stomach) position. Maybe, maybe, it’s also possible to get this effect on one’s side (where is the fancy jargon for that?) — my preference — if one can get the mouth pointing somewhat downward.

You can probably imagine how one might do this with the right pillow architecture and neck/head tilt. here’s the best picture that sort of illustrates it that I could find on the internet, if only she’d tilt her head a bit forward and/or rotate it a bit pillow-ward (see what I mean?): 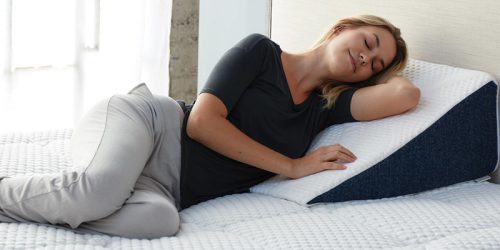 This idea led me down a rabbit hole searching for evidence of sleep position on apena events. There’s stuff out there, but it’s pretty much all about how supine sucks and prone rocks, relatively speaking. OK, but what about clever, mouth downward side sleeping?

With a pile of pillows, I did a bit of experimenting with this early this morning (more to come) and it’s clear one can get some gravity going in the right direction. The process measure here is drool. If it’s coming out of your mouth, figure your tongue is subject to the same forces, provided physical laws are constant across space. I cannot yet conclude it helps any, but I was already pretty wake from hours of apnea events and lack of effectiveness of my small Ambien dose, etc.

Naturally, one could just go full prone, but that’d take considerable adjustment for me. I searched for prone sleeping pillows. Not convinced I’ve found anything worth the money. I did find this, for side sleeping, but it’s hard to tell if it’s worth it.

4. What about OTC MADs? One respondent pointed out they’re out there, which I knew. But which are worth trying (again, as an interim step before getting something better or a CPAP machine)? No idea and I couldn’t find any sound guidance on this point (feedback welcome).

5. Nobody said this, but there are a lot of crappy studies out there about OSA and treatments. I can’t be bothered to find them now, but I chased down some work about how playing various wind/brass instruments might be associated with more/less OSA. I play trumpet, so this is relevant. I don’t think any of this stuff is conclusive and the studies are not very good.