“Rate shock” in California is not due to increased insurance generosity

The following is a guest post by Sam Richardson, an instructor at the LBJ School of Public Affairs, UT-Austin. Sam is also a PhD candidate in Health Policy (economics concentration) at Harvard, where next month he will be defending his dissertation on quality-based provider payment. You can follow him on Twitter: @Prof_Richardson.

Avik Roy and others have been beating the drum on “rate shock”, the idea that younger, healthy people (particularly young, healthy males or “bros”, for short) will face much higher premiums under Obamacare than they pay for non-group insurance now. One counter to their argument has been that Obamacare’s mandated minimum coverage requirements would mean that while bros will pay higher premiums, they will get more generous coverage. Roy’s response has been that bros currently buying cheap plans clearly don’t value more generous coverage, or else they would purchase it. But everyone (except perhaps the Capital One baby) places some value on more generous insurance; the question is simply how much.

I decided to do some digging into the minimum coverage question, and it turns out that Roy has a much better response available: at least in California, bronze plans on the exchanges aren’t any more generous than the cheapest non-group plans currently available. (Ohio is potentially another story, where one of the comparison plans used by the Department of Insurance had a $25,000 deductible.)

I don’t have an army of interns, so I focus on plans available in Sacramento county (population 1.4 million, with health insurance premiums close to the state median: not as cheap as Los Angeles, and not as expensive as the San Francisco Bay Area). Going to eHealthInsurance.com, and entering a Sacramento zip code (95811), I find that the cheapest plan available to a 25-year-old is $94/month, offered by Health Net. (Note that in California men and women are currently charged the same premiums, so what applies to a bro also applies to a sis.) The second-cheapest is the $100/month 50/5000 plan from Kaiser Permanente. Because Health Net is not participating in the exchange in Sacramento, I picked the Kaiser plan, and compared it to the Kaiser bronze-level exchange plan, which is at $205/month is the second cheapest bronze-level plan, after a $197/month plan from Anthem Blue Cross. A nice benefit of comparing Kaiser’s plans is that Kaiser’s provider network is the same across all of its plans, and there has been concern that California insurers may be bringing down exchange premiums by excessively restricting their networks. Data on California exchange premiums are from CoveredCA.com’s 2014 Health Plans and Rates booklet, and data on the standardized benefits packages at each level are available here.

The table provides a summary of benefits for each plan, and it is striking how similar the plans are. The bronze plan has a $400 higher out-of-pocket maximum and somewhat higher copays, but the 50/5000 plan does not cover prescription drugs. (Note that a similar 40/4000 plan is currently available to the 25-year-old at $140/month, with a $4000 deductible and prescription drug coverage.)  So which plan is more generous overall? The actuarial value of a plan is an overall summary of the generosity of its benefits (actuarial value is the expected percent health care spending that will be paid by the plan, with the remainder paid by the enrollee). Luckily for us CMS has posted an actuarial value calculator: using the calculator I find that the overall generosity of the plans is nearly identical. 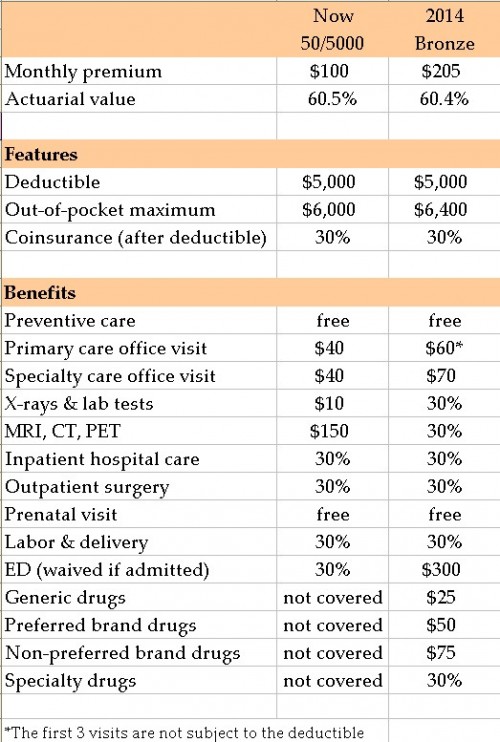 For this post, I’ve put aside the question of how much we should care about protecting the vulnerable bro population, or whether we are likely to see adverse selection death spirals as bros drop out of the market (probably not, based on the Massachusetts experience). My work is admittedly preliminary, looking at one insurer in one part of one state, but I expect the result to be similar in the rest of California, if not across the country. Please let me know if you replicate this, looking at different plans in different parts of California, or in different states. But I would be surprised if rate shock in California will be driven to any meaningful extent by increased insurance generosity.