The Institute for Clinical and Economic Review (ICER) has produced a review of the comparative effectiveness and value of treatment options for low-risk prostate cancer. For anyone interested in this topic, it’s worth a look. You might as well be aware of their other reviews too. The low-risk prostate cancer review includes this handy decision guide (pdf): 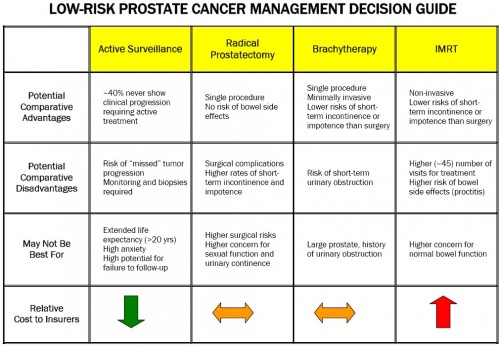 So, that’s all good. Then, from Health Affairs, there’s this:

Forty-two percent of the [direct-to-consumer promotional] pages listed no risks of robotic prostatectomy on the landing page or a page one link away. […]

Sigh. Let’s put all that in or near the “bad” category. No surprise here, really. And it clearly is not all bad. Many who received these services (biopsies, imaging, radiation treatment, robotic prostatectomy) benefited or feel they did. Yet, there is tremendous room for efficiency gain in our health system, corresponding to appropriate application of comparative effectiveness evidence and shared decision making. Naturally, many well-meaning policy initiatives toward this end might cause too abrupt a disruption and loss of income for certain types of providers, which is the source of resistance to them. So, why not pay for efficiency and use of evidence and consumer-involvement and penalize in cases of lack of application of them? It may cost something (or save less than blunt cuts, which are politically challenged anyway), but at least we’d be getting something for our money.

So, what about “ugly?” Look no further than the Wall Street Journal. Bill Gardner provides a counterpoint.