Progress can be made, lead edition

Yesterday, I despaired for science. Here’s something that made me feel better. It’s a paper by Jessica Wolpaw Reyes, entitled, “Lead Policy and Academic Performance: Insights from Massachusetts“:

Childhood exposure to even low levels of lead can adversely affect neurodevelopment, behavior, and cognitive performance. This paper investigates the link between lead exposure and student achievement in Massachusetts. Panel data analysis is conducted at the school-cohort level for children born between 1991 and 2000 and attending 3rd and 4th grades between 2000 and 2009 at more than 1,000 public elementary schools in the state. Massachusetts is well-suited for this analysis both because it has been a leader in the reduction of childhood lead levels and also because it has mandated standardized achievement tests in public elementary schools for almost two decades. The paper finds that elevated levels of blood lead in early childhood adversely impact standardized test performance, even when controlling for community and school characteristics. The results imply that public health policy that reduced childhood lead levels in the 1990s was responsible for modest but statistically significant improvements in test performance in the 2000s, lowering the share of children scoring unsatisfactory on standardized tests by 1 to 2 percentage points. Public health policy targeting lead thus has clear potential to improve academic performance, with particular promise for children in low income communities.

When I was in medical school, and even when I was a resident, lead levels in kids were a huge deal. Back when lead was in gasoline and paint, kids would ingest a fair amount of it. This led to decreased cognition and performance in school. Back in the 1970’s, when I was a kid, about 90% of American children had levels that would be concerning today. I still wonder how much much smarter I could be if I had grown up in a more lead-free time.

But we’ve been working on the problem. Now unleaded gasoline is ubiquitous. Lead based paint is gone, and traces of it in houses have been regulated away to an amazing extent. It’s made a tremendous difference in blood levels of lead in children: 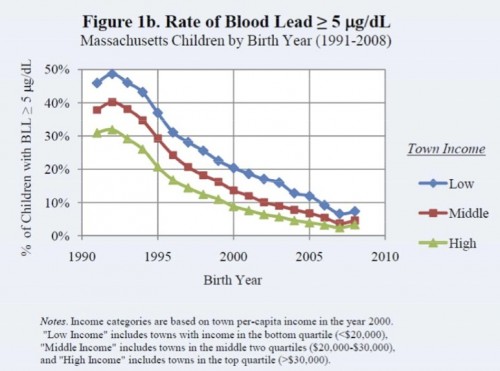 Back in the 1990’s, many children still had lead levels greater than 5 micrograms/deciliter. Almost half of poor kids had lead levels that high. But public health measures worked. By 2007-2008, those numbers had come way, way down. What’s even better, standardized test scores have been going up. Even after controlling for community and school characteristics, these lead level drops account for about one to two percent more children achieving satisfactory scores on their math and English standardized tests in fourth grade.

While still a problem, lead isn’t the major crisis it once was. Public health laws and regulations can make a difference.

*Full disclosure: Jessica and I went to Amherst College at the same time. We even had some chemistry classes together. Evidently, she’s now a professor there, which makes me extremely jealous. I’m still waiting for my invitation to be a visiting professor!