Physician fees and salaries in the US and other countries

There’s a new manuscript in Health Affairs on the higher fees paid to US physicians compared to other countries. Let’s work through the abstract:

Higher health care prices in the United States are a key reason that the nation’s health spending is so much higher than that of other countries.

Can’t argue with that!

Our study compared physicians’ fees paid by public and private payers for primary care office visits and hip replacements in Australia, Canada, France, Germany, the United Kingdom, and the United States. We also compared physicians’ incomes net of practice expenses, differences in financing the cost of medical education, and the relative contribution of payments per physician and of physician supply in the countries’ national spending on physician services.

Fees are the amount paid to the doctor’s office for a visit or to surgeons for their services. This is different from salaries, of course, as overhead and infrastructure should be bundled in fees.

So, not surprisingly, things cost more in the US.  Way more. This is when I say that this would be OK (potentially) if the outcomes or quality were so much better in the US. They’re not. It would also be explained if the US was doing more per visit, doing more services, or if costs were higher. They’re not. It’s just the fees. This has been shown before.

I think most news, however, will focus on the salaries of physicians in the US. They’re higher than in other countries: 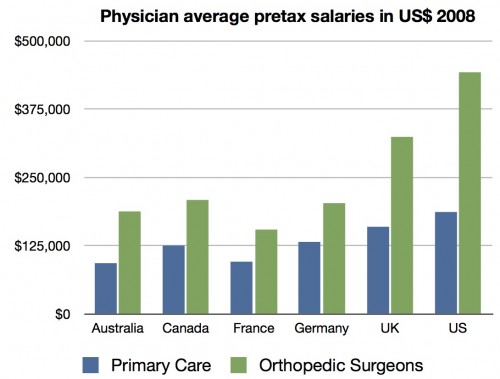 A few interesting things here. First of all, while primary care docs in the US make more than all the other countries, the differences aren’t as huge as you might expect. There’s a much larger difference between the salaries of orthopedic surgeons, and between orthopedic surgeons and primary care docs in the US than in other countries. As the authors note, this may be due to the fact that the “share of income received by people in the top 1 percent of the US income distribution far exceeds the corresponding share in the comparison countries.”

What I find more interesting, though, is the UK. Remember, when you want to panic physicians, tell them we might have something like the NHS in the UK. That’s not a single-payer system (like Medicare), it’s a government run system (like the VA). Yet, physicians make more money in the UK than in all the other countries, even Germany, which has a largely private system. Once again, fear trumps reality.

I’d also like to caution those who will take these data and assume they can fix the costs of the health care system just with physician salaries. Yes, they’re high, and yes, they should be justified to remain so, but they’re still not the main cause of our health care spending: 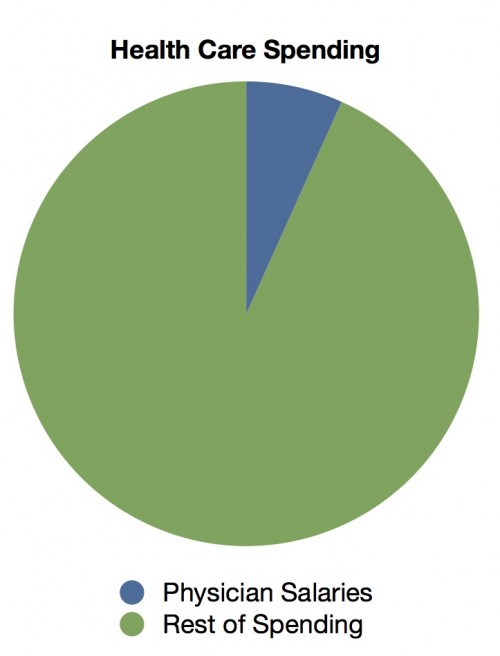 That’s 2006 data, but physician salaries accounted for 7% of spending. We’re not going to cut that to zero, obviously. Even if we make substantial reductions, our health care spending will be enormous, and it won’t “bend the curve”. Solutions need to be holistic. There’s a tendency to look for one bad culprit. That won’t work in health care.