People really do need other people

There’s a new study out in Archives of Internal Medicine that made me a bit sad. “Loneliness in Older Persons: A Predictor of Functional Decline and Death“:

Background  Loneliness is a common source of distress, suffering, and impaired quality of life in older persons. We examined the relationship between loneliness, functional decline, and death in adults older than 60 years in the United States.

Methods  This is a longitudinal cohort study of 1604 participants in the psychosocial module of the Health and Retirement Study, a nationally representative study of older persons. Baseline assessment was in 2002 and follow-up assessments occurred every 2 years until 2008. Subjects were asked if they (1) feel left out, (2) feel isolated, or (3) lack companionship. Subjects were categorized as not lonely if they responded hardly ever to all 3 questions and lonely if they responded some of the time or often to any of the 3 questions. The primary outcomes were time to death over 6 years and functional decline over 6 years on the following 4 measures: difficulty on an increased number of activities of daily living (ADL), difficulty in an increased number of upper extremity tasks, decline in mobility, or increased difficulty in stair climbing. Multivariate analyses adjusted for demographic variables, socioeconomic status, living situation, depression, and various medical conditions.

They gathered a group of people (1604 in fact) over the age of 60 and followed them for  6 years. They measured a number of assessments every 2 years from baseline to the end of the study. The predictors of interest included measures of loneliness. The outcomes of interest included activities of daily life, physical functioning, and death. They also collected the usual demographics (including depression) so that they could control for them in analyses. This is a classic prospective cohort design.

Let’s start with some of the unadjusted outcomes:

While I have no benchmark for the rest of the country, it pained me that more than 40% of the elderly reported feeling some measure of loneliness. Even if it turned out this was no worse, or even better, than younger Americans, that would still be disappointing. I wasn’t surprised to see that older people were lonelier, but I was surprised to see that lonely subjects were more likely to be female. I was also surprised to see that so many of the people who were lonely did not live alone.

Even after adjusting for confounders, loneliness was significantly associated with nearly all of the measures of functional decline. This included declines in activities of daily life, difficulties in upper extremity tasks, and difficulty in climbing the stairs. It also included death: 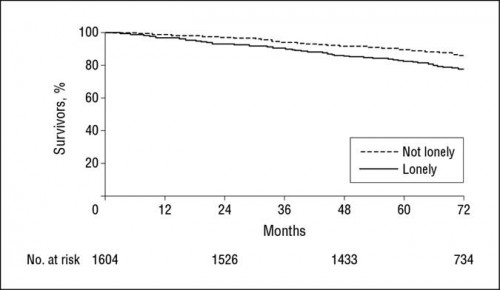 Loneliness was significantly associated with a higher risk of death (22.8% versus 14.2%) over the six year period.

There was a study (that I can’t find) I once read that theorized that as people spent more and more time together, they started to treat their brains as shared hard drives. I’ve always found this resonated with me. My wife is amazing with people’s names, relationships, phone numbers, etc. So I don’t bother to learn all that stuff. I know where to access it when I need it. But as people grow older and spend more time together, the sharing of the hard drive becomes more difficult to differentiate. When those people can no longer live together, it’s like you suddenly erased half the hard drive. It can’t be accessed. It could be an explanation for why mental status can decline so rapidly after a spouse dies.

As we spend time together, we learn to need each other. When we don’t have other people, our functioning declines more rapidly. We sometimes die. This study ends with a call to the medical community to screen for loneliness in order to identify those who might receive more services to prevent that decline. I’d rather see it as a wake up call to the rest of us to try and prevent that loneliness in the first place.