Patients do better when cardiologists are away at academic meetings

This paper is going to really piss some people off. “Mortality and Treatment Patterns Among Patients Hospitalized With Acute Cardiovascular Conditions During Dates of National Cardiology Meetings“:

Importance: Thousands of physicians attend scientific meetings annually. Although hospital physician staffing and composition may be affected by meetings, patient outcomes and treatment patterns during meeting dates are unknown.

So here’s the gist. There are two big cardiology meeting every year, and when they occur, lots of cardiologists go to them. Fewer of them are left home to care for patients. So the researchers looked at how patients admitted to the hospital fared during those meeting dates compared to the three weeks before and after the conferences. Specifically, they looked at 30-day mortality for patients admitted with acute MIs, heart failure, or cardiac arrest.

When I first looked at this, I assumed that they were concerned that patients would fare worse during the meetings. I thought they were worried with all the cardiologists off at meetings, patients might have worse outcomes. 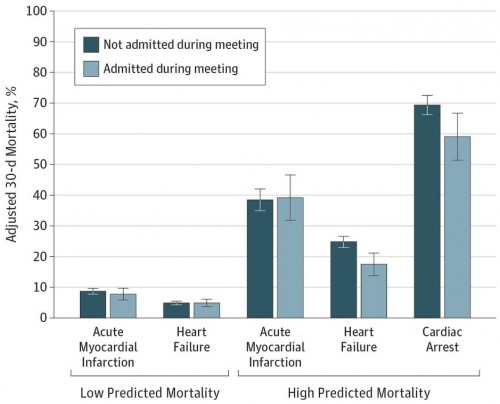 So obviously, there are some top level concerns here, and the researchers addressed some of them. Maybe any meeting affects patient care. But they found that cardiac mortality wasn’t affected by oncology, gastroenterology, or orthopedic meetings. They also found that mortality from GI or orthopedic issues wasn’t affected by hospitalization during the cardiology meetings. This was strictly a cardiology meeting associated with cardiologic outcomes.

They have no measurement of staffing during those meetings, so we can’t really know what was the cause of the finding. Were fewer cardiologists really available?

But here’s the thing. Whatever is different during the meetings, it’s associated with lower intensity care and better outcomes. That’s probably worth looking into.