It’s baaack, by which I mean the idea of below-federal-poverty-level-income families in states not expanding Medicaid over-reporting their income so as to obtain subsidies for marketplace plans.

Yeah, that’s a mouthful, so let’s back-up. I tweeted about this over a year ago and followed up with a post that spelled it all out:

Here’s the idea: Imagine, in 2014, you are a person desiring health insurance and with <100% FPL income in a state that has not expanded Medicaid. It remains true that if your income were 100% FPL you could get subsidized coverage on the exchange. What to do? […]

[An] answer is to claim 100% FPL income, e.g., by saying you have some unreported cash income. Maybe you mowed some lawns and moved some furniture around the community. What entity is going to be able to successfully challenge this claim? It is hard to imagine the IRS auditing lots of poor people because they are claiming their incomes are too high.

Harold Pollack also addressed this possibility in a post in which he quotes Tim Jost as suggesting this is not likely to be a rampant problem. A month later Phil Galewitz discussed this as well, quoting Jost and others about its ethics and legality.

[I]f an individual projects their income up to 10 percent higher than shown in electronically available data such as a prior tax return, there will be no questions asked. If there is more than a 10 percent discrepancy, the exchanges will ask for more information, such as a pay stub. If an applicant is unable to provide such data, the regulations allow the exchanges in 2014 to rely on the individual’s “self-attestation” to determine the subsidy. This applies only when someone overestimates their income, according to a spokeswoman for Health and Human Services.

New analysis by Aaron Schwartz and Jacob Wallace illustrates the enormous benefits a family in a state not expanding Medicaid would receive by somehow nudging its income over 100% of the Federal Poverty Level (FPL), the lower cutoff for premium tax credits. 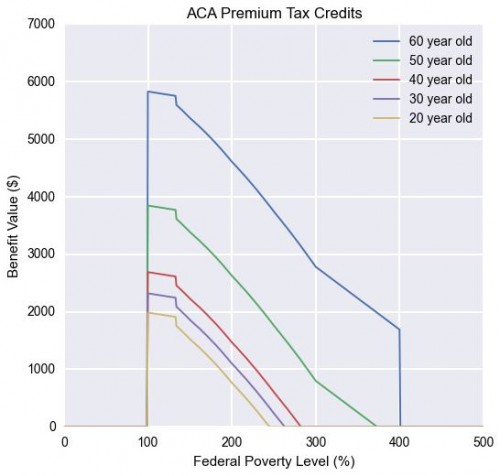 First, the magnitude of the cliff and the fact that individuals can earn too little to qualify is, as far as we can tell, unprecedented in social welfare programs. Second, if individuals respond to this incentive by seeking a second job or working longer hours, then the policy may increase labor force participation for individuals near the coverage threshold, which may be a desirable outcome.

Third, any response will increase the number of people covered by exchange plans and the cost of subsidized coverage above initial projections. Finally, low-income individuals who are genuinely uncertain regarding their future income could benefit from clarification regarding the legal consequences of their projections.

Given all of the above, if you had some uncertainty about your income, how concerned would you be about projecting it to be at least 100% FPL in order to qualify for affordable coverage? How would you advise others, particularly individuals with chronic illnesses who would otherwise have difficulty obtaining maintenance medications and services? What’s the policy response, if any? These are rhetorical questions. No need to send me answers. Just ponder them.