Chas Roades’ tweet, reacting to a question from Nancy Cordes to Hillary Clinton during the Democratic debate on November 14, initiated a multi-day of discussion.

High deductibles is THE issue in healthcare the next 4 years. We’re bending the cost curve on the backs of the middle class. #DemDebate

(The discussion broke across different Twitter threads, so not all of it can be found linked to Roades’ tweet.)

Roades is right that deductibles are a huge issue. Data from the KFF/HRET employer survey shows them rising faster than premiums, wages, and inflation since 2010. 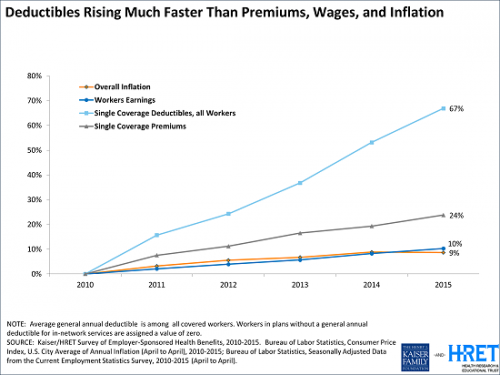 Not to dismiss the political salience of rising deductibles, in his talk preceding presentation of Hamilton Project papers in October, Jason Furman shared some important context. First, deductibles are rising, but their rate of growth has slightly moderated since 2010, as shown from two different sources of data in Furman’s figure just below. 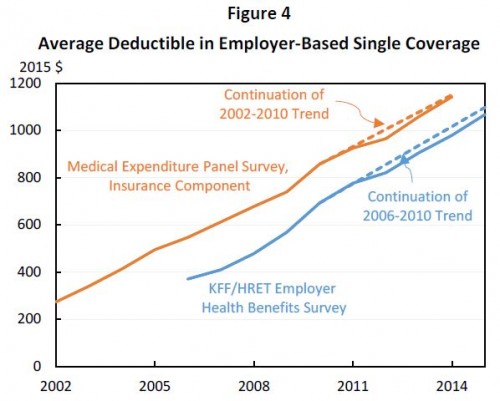 Still, growth is growth, and the figure shows deductibles going up. However, it is worth knowing how quickly total out-of-pocket costs, not just deductibles, are going up. Relative to total spending in employer-sponsored plans, out-of-pocket spending has actually trended down, as shown in another of Furman’s charts, just below. 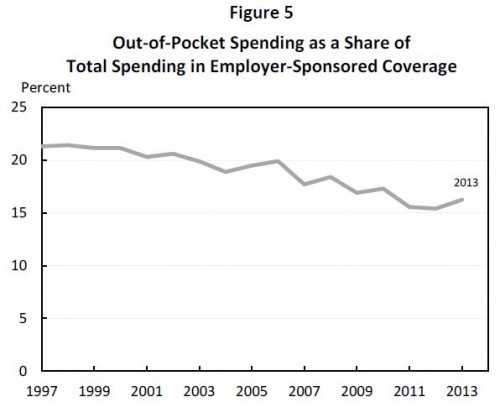 This is consistent with data from the Health Care Cost Institute, but only for the most recent year of its data. In its chart, just below, the bars correspond to dollars (left hand vertical axis) and the dashed lines to percent changes (right hand vertical axis). Both payers (i.e., employers) and insured (i.e., workers) are paying more in absolute terms each year, but the growth in out-of-pocket spending moderated, falling below payer spending growth in 2014. 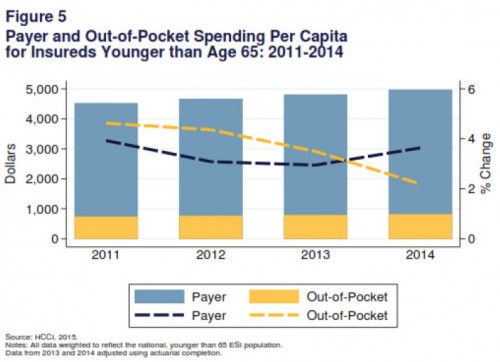 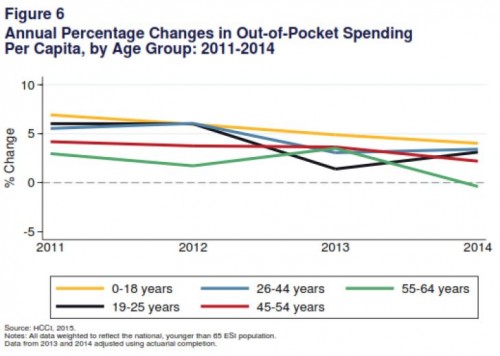 Contributing to out-of-pocket spending growth moderation is the fact that the ACA prohibits lifetime and annual coverage limits for essential health benefits.

Some of the Twitter discussion centered on details of the specific data sources used in the charts above, in an attempt to explain differences. For instance, the Medical Expenditure Panel Survey relies on self reported spending, the HCCI sample doesn’t capture some insurers, and so forth. Nevertheless, I see the findings above largely pointing in the same direction in one respect: out-of-pocket spending—even deductible—growth has slowed, and come down relative to total spending at least in 2014, if not over a longer period.

Slower growth is not the same as no growth. Deductibles are rising, and people find that bothersome, which does not surprise me.

All of this raises some questions: