What we know about hospital networks of exchange plans

We have [] enhanced our hospital network database to include all products in all tiers in all 501 rating areas in the U.S. […] Our database includes all 282 payors filing on the 2014 exchanges and all 4,773 acute care hospitals in the U.S. The payors offered a total of 20,818 on-exchange products across the five metal tiers; these products included 2,366 unique individual exchange networks.

I believe one has to hit and scrape marketplace and/or plan websites repeatedly to collect such data, so it’s either a large, manual job or one requiring some clever programming. I have little doubt that many enterprising graduate students are building or have built a similar database, but McKinsey’s report is the first product based on such a thing that I’ve seen. It’s an interesting read.

Finding 1 certainly gives the impression that broad networks are widely available, albeit for a price. However, it’s also true that, relative to incumbents’ 2013 individual market offerings, the proportion of plans with broad networks has fallen, as shown below. 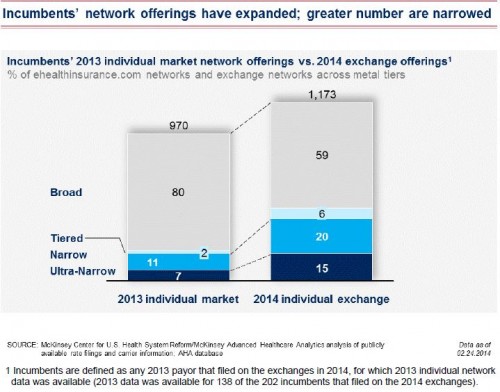 To the extent one believes CMS hospital metrics to be good measures of quality, finding 2 should be of some comfort to those who only have access to or can afford more narrow network plans.

Finding 3 surprises me. I would have expected a greater percentage of enrollees to have no idea what kind of network their plan offers. Combining findings 2 and 3, maybe we need not be so concerned about potential opacity of network extent and quality. (Important caveat 1: the analysis in the report only applies to hospitals, not to physician networks. Important caveat 2: the survey results may not be accurately generalized given methodology.)

Finding 4 is what I would expect of Medicaid- and provider-based plans. Medicaid’s relatively low payment rates aren’t going to appeal to a wide network of hospitals. And, one purpose of provider-based plans is to cater to the providers that offer them, even foreclosing access to those providers by other plans.

I would have liked to have seen a clearer picture of how network extent varies by metal tiers. The silver tier is of particular interest since premiums of plans in that tier drive premium tax credits and it is only for plans in that tier that cost-sharing subsidies are available. It also, as it turns out, is the most popular plan type.

The report has many other findings and charts. It’s worth a look.