A new paper in Health Services Research by Michael Morrisey and colleagues examines favorable selection experienced by Medicare Advantage (MA) plans. Though there is much more in the paper, their Figure 1 provides a summary of some of it. 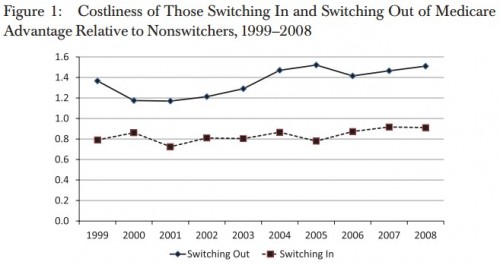 By necessity, cost is measured as FFS costs during the six months after (before) switching out of (into) MA. Comparable claims and payment data are not available for MA, preventing researchers from studying utilization and spending for the program directly. However, this is not as large a limitation as it may seem. If we could analyze experience of MA directly, it would be confounded by care management by plans. That is, beneficiaries’ costs while enrolled in MA may be lower both due to favorable selection and due to care management. By comparing FFS experience for switchers and non-switchers, the effect of MA care management is removed.

The conclusions are clear:

[B]y the end of our analysis period in 2008, the 6 months prior claims experience of new enrollees remained only 91 percent of that of traditional Medicare enrollees in the same county over the same time period. We also found that the average claims experience of those disenrolling relative to those always in traditional Medicare was substantially higher in the last years of our study period. […]

[Our study] indicates that the MA population continues to have claims experience that is favorable relative to those in traditional Medicare.

The clear implication is that studies that take MA bids as reflective of plan costs for an average beneficiary may be overstating the potential savings of premium support.* A substantial portion, if not all, of the degree to which MA bids are below FFS costs may be due to favorable selection.

* UPDATE: The sense in which savings may be overstated is that if, under premium support, private plans do not experience selection as favorable as MA does, then they may need to charge more than their current MA bids suggest. This would happen if a substantially greater proportion of beneficiaries enrolled in private plans, a not unlikely outcome of premium support.