Christopher Flavelle has put together a fascinating Bloomberg Government Study on the allure and growth of Medicaid managed care and the recent trend in Medicaid spending by states. It’s the first of three pieces in this area and, unfortunately, is behind a paywall. If you can get your hands on it, it’s worth a full read. If you can’t, here are a few details we thought worth highlighting.

Flavelle writes that advocates of turning Medicaid into a block grant program often claim it would “increase spending predictability.” Given this and other rhetoric from states about their “out of control” Medicaid growth, you’d think that spending has been growing exceptionally rapidly recently.

According to analysis by Flavelle, that’s not the case.

Inflation adjusted Medicaid spending per capita by state general funds increased just 3.8% between 2002 and 2011. This is illustrated by the dotted line in the chart below. Per capita Medicaid spending by each of the five states with the largest Medicaid programs is also shown. Though they gyrate up and down, they all end up at the end up in 2011 close to or even below where they started in 2002. 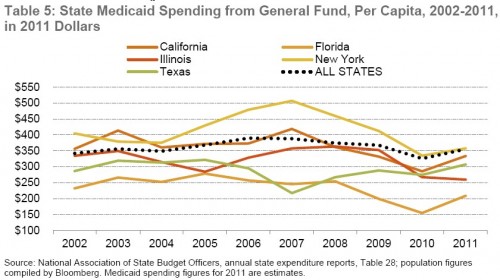 Some might object to dividing spending by the state population (per capita), because the population grows over time.* Of course, the state’s population reflects its potential tax base too, so it is fair to divide by it by that standard. A State with a growing population should to be able to afford commensurate growth in its Medicaid spending, though that can depend on how different sectors of the population grow relative to each other (more wealthy or more poor people).

In any case, total (not per capita) real Medicaid growth was just 12% from 2002 to 2011. That’s not as high as we expected, though there is variation by state. While spending in Illinois actually decreased by 1% over this period, spending in Texas went up 58%. Moreover, this is growth above inflation, so there is room for improvement. Still, Medicaid has held spending growth below that of other payers. Flavelle quotes Vernon Smith, former Medicaid director for Michigan:

“When you look at the rate of growth for all the major payers — Medicaid, Medicare, employer-sponsored insurance, National Health Expenditures — what you see is that no other payer has constrained the rate of growth in spending as well as Medicaid has. [] The reason is that no payer has been as motivated to undertake cost containment as state governments.”

In total, it looks like states have done a pretty good job. Based on spending trends alone, it isn’t clear why officials in some states think the program needs major restructuring. That’s not to say it is perfect or that there aren’t other justifications for reform. Of course there are. In fact, given its low reimbursement rates, some might reasonably argue we should spend more on Medicaid, not less. At any rate, the data don’t support claims that state spending on Medicaid has been growing in an especially concerning way, particularly relative to other payers.

* Another potential objection is that Medicaid spending by state general funds does not count “other funds and revenue sources used as Medicaid match, such as local funds and provider taxes, fees, donations, assessments.” True! However, Flavelle justifies a focus on general fund spending by quoting Alan Simpson who characterized that type of spending as a “tax gimmick” and that states just use “that additional ‘spending’ to increase their federal match.” If you collect a dollar and then give it back to those you collected it from in order to get another dollar (or more) from the federal government (which, of course, you also spend on the same providers you taxed), have you really spent your own funds?