Across all plans and marketplaces, 12% of networks are x-small, 19% are small, 24% are medium, 31% are large, and 15% are x-large. That’s a lot of numbers. Since consumers, wonks, and policymakers are probably most concerned about narrow networks, it may be simpler just to pay attention to the proportion that are either x-small or small: 31%.

According to their analysis, for the most part, there is little correlation between network extent and metal tiers. As shown in the chart below, within metal tier, the distribution of plans’ network extent is fairly stable. The one exception is platinum plans, which have a substantially higher proportion of narrow networks, with 41% x-small or small. However, platinum plans only attract 5% of enrollees.

There are two exceptions. First, networks for psychiatrists tend to be much more narrow (45% x-small or small) than other specialists (e.g., 31% x-small or small for PCPs). This raises concerns about adequate access to mental health care in marketplace plans. Second, hospital-based physician networks are extremely narrow: 72% x-small or small. As the authors point out, “This is notable given that this is the group of physicians most likely to lead to a surprise out-of-network bill.”

Network extent varies tremendously by state. The chart below shows the percent of networks in each state that are x-small or small. It would be valuable to understand what accounts for such variation and its implications. How does it relate to provider and insurer market power, for example? What patterns of care and outcomes correlate with network extent? I’d also like to know how geographic variation of network extent looks by specialty, again with the implications for access and health care outcomes. 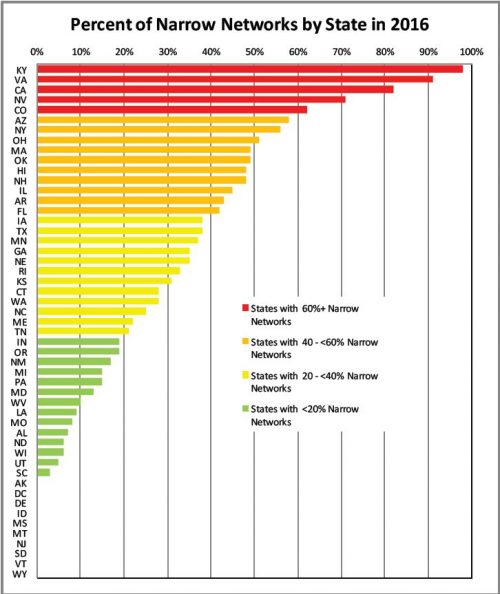 If you’re concerned about narrow networks, you might want to know how their prevalence has evolved over time. The authors compared network extent from 2014 to 2016 for silver-rated plans. By and large, the proportion of narrow network plans didn’t change, though there was a shift from small networks (declining from 31% to 29%) to x-small networks (increasing from 6% to 12%).

You’ll find even more stats in the Brief. Though the Leonard Davis Institute investigators have made aggregate marketplace network extent more transparent to policymakers and the public, making network extent — including within specialty — transparent to consumers at the time of plan purchase is an ongoing challenge. Also particularly troubling is

[t]he high prevalence of narrow networks among hospital-based physicians […]. Given that these physicians are the ones most likely to send surprise out-of-network bills, this remains a concern for those with narrow network plans and broad plans.