Yesterday I described a new paper that provided evidence that the individual mandate in Massachusetts has done the job it was designed to do, namely to cause the individual insurance market risk pool to become more favorable (include more relatively healthy individuals than it otherwise would).

Today there is more evidence that a means of motivating healthy individuals to enroll (like a mandate) is a necessary part of insurance market reforms. Anthony Lo Sasso shows that community rating and guaranteed issue in the absence of a mandate (or some other incentive for the healthy to enroll) cause the risk pool to become more adverse (include more relatively sick individuals). He examined states that have implemented reforms of that type and provides the following figure. 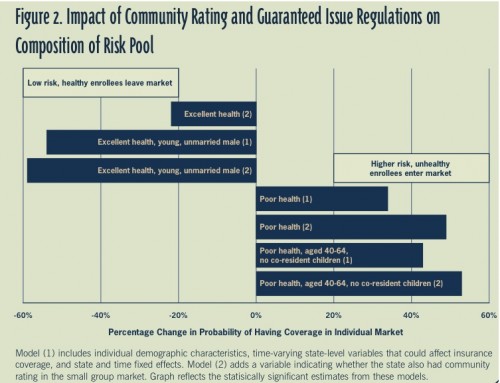 The above results show that community rating was associated with a worsening of the non-group risk pool as younger and healthier individuals left the individual market while older and sicker individuals joined or remained in themarket. To test the robustness of this conclusion, we used data from the National Health Interview Survey (NHIS) to compare changes in detailed measures of health status and utilization for people with non-group coverage in several community rating and non-community rating states. We found that those maintaining non-group coverage after the adoption of community rating were significantly more likely to have days when they were restricted to bed or when their activities were otherwise restricted because of health problems as well as more doctor visits and hospital stays. In other words, community rating in the non-group insurance market led to a pool of enrollees in poorer health. […]

Our results provide a compelling portrait of the distortions that can result from community rating and guaranteed issue regulations in the non-group market when there are no provisions in place to keep people enrolled in coverage. The deterioration of the risk pool is consistent with predictions from economic theory and potentially lays the foundation for an adverse selection death spiral.

(Aside: In the very next sentence Lo Sasso suggests–though doesn’t quite say–that Massachusetts has experienced an adverse selection problem despite its mandate. I disagree with that notion. The gaming of the system Lo Sasso points to is far too small to be a problem.)

Let’s be clear about what all this means. There are sound theoretical reasons and substantial empirical support for the idea that guaranteed issue and community rating without a mandate (or similar inducement) cause problematic levels of adverse selection. Adverse selection leads to higher premiums and can destabilize the insurance market. These are as close to facts as one gets in social science.

Consequently, if one is in favor of a well-functioning insurance market in which everyone can obtain affordable insurance, one cannot advocate guaranteed issue and community rating and nothing else. One needs some way to keep adverse selection under control. To be blunt, one can’t just take the favorable parts of the ACA and reject the unfavorable part (the mandate), at least not with suggesting a replacement that will do the same job.

One can decide if one is in favor or against the mandate on moral or legal grounds. That’s fine. But one cannot argue that it or something that serves the same role is not necessary. To suggest as much is to advocate for a dysfunctional insurance market. We’ve got that now, though not in Massachusetts. I doubt very many participating in it likes it much.

UPDATE: Nobody, myself included, noticed the by-line was wrong on this post as it originally appeared. I was caught without my customary software and had asked Aaron to start the post for me. He dropped in the figure. The rest was mine, including the first-person reference to my own post. The mix-up was caught when I saw Igor Volsky’s citation of it, understandably crediting Aaron. Whoops!