Maltreatment of girls and adolescent pregnancy in the US

The US National Academy of Sciences reports on US health in a global perspective and the news is bad. Citizens of peer nations live longer than Americans do, and the difference is growing, especially for women. The report notes nine health domains where the US falls short. I’m going to highlight two domains that are critical to child health: Injuries and Homicides and Adolescent pregnancy. These two domains are connected in a distressing way. The National Academy says that

In 2006, the United States had the highest rate of child deaths due to negligence, maltreatment, or physical assault among the 17 peer countries (and among other OECD countries, including emerging economies) (OECD, 2012k).

They may be understating the problem. Here is a plot of the rates of child deaths due to maltreatment reported by UNICEF (rates are expressed per 100,000 children). 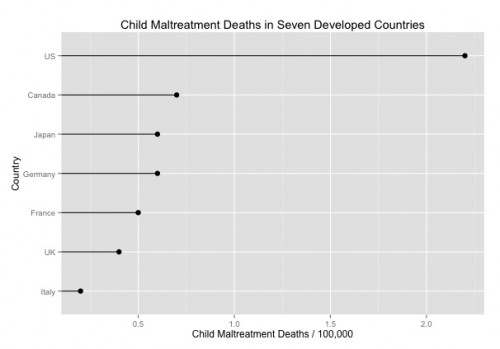 The US has about three times the rate of death from child maltreatment as Canada. I haven’t selected the countries to make the US look bad. UNICEF actually reports the rate for 27 developed countries, and we are second from worst in that group (Mexico has a very slightly higher rate of death from maltreatment). There is a slight bit of good news on this topic: the most recent data show that US child deaths from maltreatment have fallen to 2.1 / 100,000. The National Academy also notes that

Since the 1990s, among high-income countries, U.S. adolescents have had the highest rate of pregnancies.

The high US rates of adolescent pregnancy may be due in a small part to the high rate of child maltreatment. I am not certain whether child maltreatment is more common in the US than in other countries. It is harder to measure ‘child maltreatment’ than ‘death from child maltreatment’ and David Finkelhor, the leading scholar on the topic does not believe that you can make international comparisons. So it is possible that Americans abuse and neglect their children at similar rates to Canadians or Japanese, but they are just a lot more lethal when they do so.

I am confident, however, that if we could protect our girls, we would reduce the number of adolescents having babies. Here I recommend a study in the current issue of Pediatrics by Jennie G. Noll and Chad E. Shenk. They have been following a cohort of 435 girls who suffered physical abuse, sexual abuse, or neglect between the ages of 14 and 17 years old. They also identified a set of comparison girls who were matched on age, race (43% of the sample was white), family income (median income between $30,000 and $39,000), and family constellation (57% of girls came from single-parent families). None of the girls had had a child at the time of their recruitment. The girls were followed until they were 19 and Noll and Shenk looked at how many girls gave birth.

The results are simple and striking: maltreated girls are far more likely to give birth during their teens. 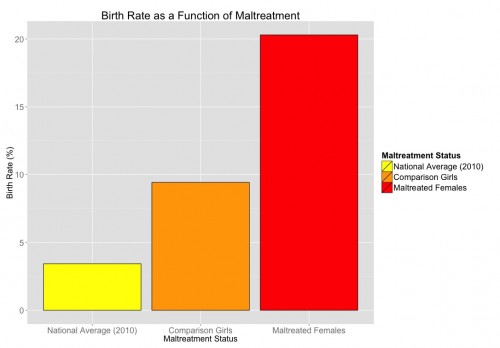 This is an observational study and it does not prove that maltreatment causes teenage childbearing. I am inclined to believe that maltreatment does cause adolescent child bearing because the association is strong and because there is a commonsensical causal explanation linking maltreatment to early pregnancy: Maltreated girls are alienated and/or separated from their parents and receive less guidance, positive modelling, and supervision from them.

Would a reduction in abuse and neglect have a noticeable effect on our rates of adolescent child bearing? It is hard to know. In 2011, about 3% of children were involved in child and family services cases that received a disposition of maltreatment. The actual numbers of abused children are presumably significantly higher. Girls are more likely to be maltreated than boys, so there are millions of maltreated girls. If anything like one in five of those girls has a baby in her teens, that’s a lot of girls. It is also a large number of American children who are born to girls who are not only very young but also the victims of maltreatment. The children of these maltreated girls are not getting the best possible start.

The issue of child maltreatment is itself neglected, but it is vital to the health of American children and their children.