A new paper in Medicare Care Research and Review by Jessica Vistnes and Alan Monheit explores the employer insurance options (or lack thereof) for low-wage workers. Their data sources are the 2006 Medicare Expenditure Panel Survey Insurance and Household Components.

Here are the charts. Click to enlarge. The first shows the percentage of workers offered health insurance by firm size and wage range (low, medium, high, as defined above). In general, low-wage workers are least likely to be offered coverage and high-wage workers most likely. This is true at the largest firms, but the gradient is tiny. However, at small firms there are huge disparities in offer rates across the wage spectrum. 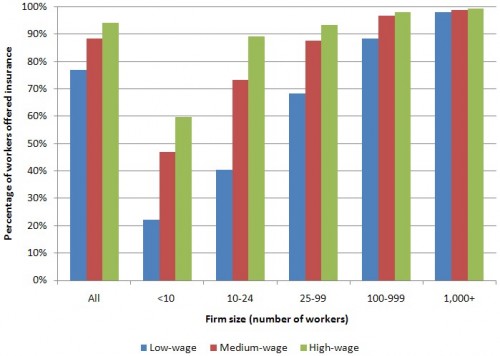 One issue that arose in my work with Steve Pizer and Lisa Iezzoni was the extent to which low-wage employees work alongside higher-wage employees. The next chart from results presented by Vistnes and Monheit addresses this head on. It considers low-wage establishments, as defined above (majority of workers receiving low wages). For such establishments, it illustrates the proportion that are entirely low-wage, a mix of low- and middle-wage, and a mix of low-, middle-, and high-wage. These are shown overall and by firm size. 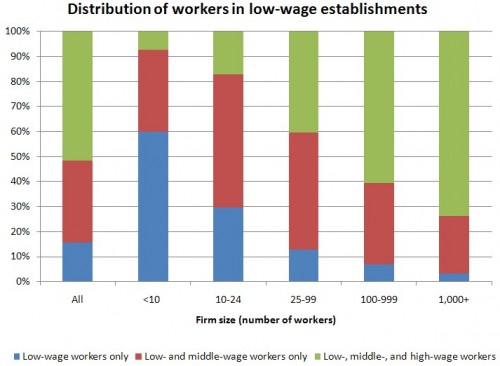 The significance of this fact is that employers’ health insurance offers and generosity of coverage are related to the average wages in the firm, more specifically the average employer-sponsored insurance tax subsidy rate (or “tax price“). Thus, low-wage workers might be offered very generous health insurance due to the high tax subsidy enjoyed by their higher-wage colleagues at the same firm. This is how low-wage employees — even those potentially eligible for Medicaid — can have high-premium coverage, high enough to be subject to the Cadillac tax (if not now, then in time as the Cadillac tax threshold fails to keep pace with health care costs, by design). This phenomenon is what drove the results of our recent paper, about which Steve blogged (here, here, here, and here).

For all that, many low-wage workers are not offered coverage with high frequency. Vistnes and Monheit write,

Once eligibility rates are taken into account, only 62.2% of low-wage workers at the largest low-wage establishments and 51.8% at the next largest firm size have access to coverage […]. These rates are roughly 20 to 30 percentage points lower than those at other large employers that employ low-wage workers.

Since employer-based coverage is the principal way the non-elderly obtain health insurance (in part because of the dysfunctions of the non-group market, as well as the employer-sponsored insurance tax subsidy), this is a significant inequity. It is precisely the one intended to be remedied by the ACA. Indeed, it is hard to think of a good reason to prefer such inequities in opportunities to purchase health insurance.