From the NEJM, “Randomized Trial of Reduced-Nicotine Standards for Cigarettes“:

BACKGROUND: The Food and Drug Administration can set standards that reduce the nicotine content of cigarettes.

METHODS: We conducted a double-blind, parallel, randomized clinical trial between June 2013 and July 2014 at 10 sites. Eligibility criteria included an age of 18 years or older, smoking of five or more cigarettes per day, and no current interest in quitting smoking. Participants were randomly assigned to smoke for 6 weeks either their usual brand of cigarettes or one of six types of investigational cigarettes, provided free. The investigational cigarettes had nicotine content ranging from 15.8 mg per gram of tobacco (typical of commercial brands) to 0.4 mg per gram. The primary outcome was the number of cigarettes smoked per day during week 6.

This study is a lesson in simplicity. They rounded up smokers at least 18 years old, meaning that they smoked five or more cigarettes a day. Interestingly, they also had to have no current interest in quitting. That’s different than most studies, that focus on people who want to stop. These people were less motivated, therefore, and less likely to actually quit.

They were then assigned to either smoke their usual cigarettes (placebo), or one of six study cigarettes, ranging from 15.8 mg nicotine/g tobacco (which is comparable to commercial brands) to 0.4 mg/g, which is obviously much less. After 6 weeks, the researchers checked to see how many cigarettes they were smoking per day.

They randomized 840 people, and 780 completed the study. Those who were given the low-nicotine cigarettes (0.4, 1.3, and 2.4 mg/g) smoked fewer cigarettes per day than those who smoked their usual brand: 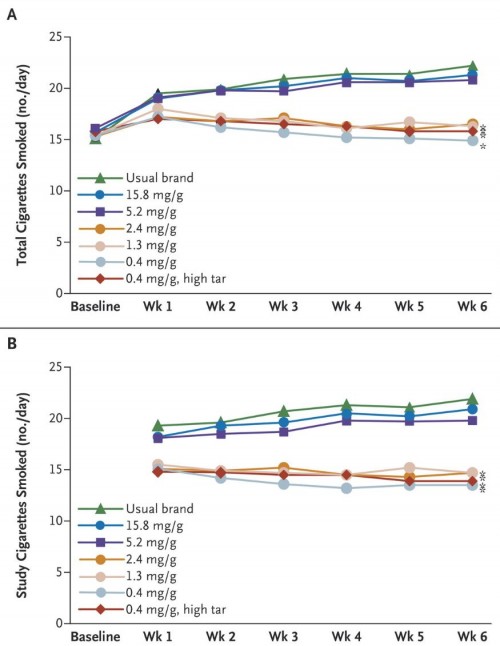 Finally, they did an abstinence assessment, where they asked them not to smoke for at least 18 hours and then report on symptoms. There were no differences in withdrawal symptoms from the different cigarettes, but those smoking the low-nicotine cigarettes reported significantly reduced cravings for a cigarette.

Many readers will wonder why, then, “light” cigarettes haven’t been pushed by health advocates. Most of those don’t contain tobacco with less nicotine; they have holes in the filter which bring in more air with inhalation and don’t seem to generate the same results. In fact, some think that people compensate when they smoke those by taking bigger puffs. In this study, using actual low-nicotine tobacco, that compensation didn’t occur.

As the accompanying editorial notes, smoking kills half of the people who smoke in the long run, usually 10-15 years earlier than they otherwise might have died. As a prominent researcher, Michael Russell, wrote, “People smoke for nicotine but they die from the tar”. If we reduce the nicotine, people may smoke less. They might also quit.

This study didn’t measure that. It also was only 6 weeks long, and long-term effects are unknown. But a longer study is in the works, and twice as many people smoking the low-nicotine cigarettes in this trial attempted to quit in the month after it was over than those who smoked their regular cigarettes.

The FDA was empowered to start regulating nicotine content in 2009. To date, they haven’t done anything. It’s likely this trial isn’t enough to make them start. But more confirmatory work might.