I’ve become a little obsessed with that WSJ article on centenarians. It really is making a big deal about people living to be over 100.

Let me start with one nitpick. The WSJ cites the number of Americans over the age of 100 as being 79,000. They source the US Census for this. I went to the Census, and I could only find the number 53,364 in 2010. That’s from this, page 4, Table 2. This is not a small difference, especially when making pretty amazing predictions about the future. If anyone can find the source for the WSJ’s number, please let me know.

I wanted to throw up two charts to caution people on using trend data on age groups while making predictions about the future. Here is the first one, which shows the number of people in each 5 year age block in both 2000 and 2010 (same data source, click to make larger): 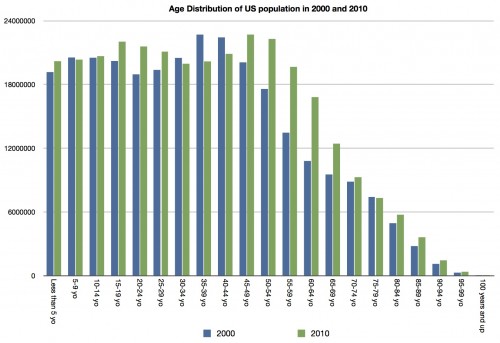 Now, if you look at this chart, your immediate inclination may be to think that people sure are living longer! The green bars in the older age groups (representing 2010) are way higher than the blue bars (representing 2000). Many more people are elderly. It’s impressive.

What you have to remember, though, is that this is mostly due to the baby boomers. It’s not that individuals are each living longer so much that a very populous group is getting older. Don’t believe me? Then look at this: 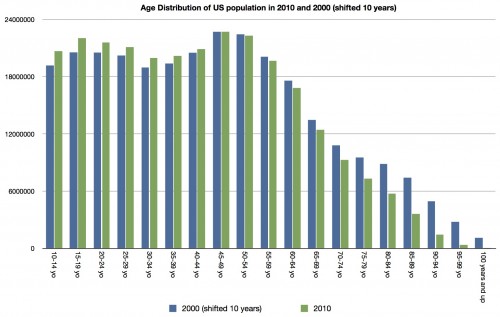 What I’ve done here is shifted the 2000 data ten years forward. If we had no immigration and no death, then the bars should be exactly the same height (because anyone who was 50 in 2000 would be 60 in 2010). On the left side, however, we’re seeing some increases from 2000 to 2010, I’m guessing due to immigration. But once we hit 50 or so, the green bars start dropping off, steeply at the end, because people died between 2000 and 2010 in those age groups. You can see that almost all of the people who were in their early 90s in 2000 had passed away before reaching their 100s in 2010.

This doesn’t mean that we’re not making strides, or likely increasing the lives of certain individuals through modern medicine. I put this up only to throw a little reality check on the idea that we’ve somehow passed a barrier where we’re all going to be living well into our second century in the near future.