Literature update: Reference pricing and the effect of cuts to Medicare hospital prices

Here are some notes from a couple of recent papers in areas I’ve blogged about in the past. They’re worth knowing about.

Medical expenditures in the US are high and increasing. […] A natural economic solution which has not received much attention is a “top-up” design in which health insurance contracts would cover the cost of a baseline treatment, and patients could choose to pay the incremental cost of more expensive treatments out of pocket.

This is also called “reference pricing.”

[T]o our knowledge, [top-up design] has not received much attention in discussions of insurance coverage for different treatments, with the exception of a recent paper by Baicker, Shephard and Skinner (2012) who use a calibrated simulation model to explore this idea.

The approximately $10,000 difference in price between lumpectomy and mastectomy is primarily the cost of post-lumpectomy radiation.

A standard course of post-lumpectomy radiation therapy requires 25 round-trips to a radiation facility, spread over 5 weeks. Our key economic assumptions are that travel time can be monetized and that preferences for reduction in travel time are analogous to preferences for any other equivalent price difference. These assumptions allow us to use the variation in distance to the radiation facility as if it were variation in the relative price of lumpectomy, thus identifying the demand curve. […] [We also assume] that there are not omitted patient characteristics correlated with both distance and demand for lumpectomy.

The results indicate how the (total) efficiency ranking of the top-up policy relative to the US-style full coverage policy depends on risk aversion. For the lowest value of risk aversion we consider, social welfare is higher under the top-up policy, but for higher values of risk aversion it is higher under the US-style full coverage policy. The full-coverage policy always delivers higher total welfare than the UK-style “no top up” policy for our calibrated values. This illustrative analysis suggests that focusing solely on ex-post efficiency analysis could miss an important part of the picture, and that the ex-ante risk exposure generated by top-up policies could be much more costly than the allocative efficiencies these policies may provide.

This makes slightly more formal the general knock on reference pricing—that it exposes consumers to greater risk. The paper’s charts are excellent. Here’s just one for the ex post consumer surplus analysis. 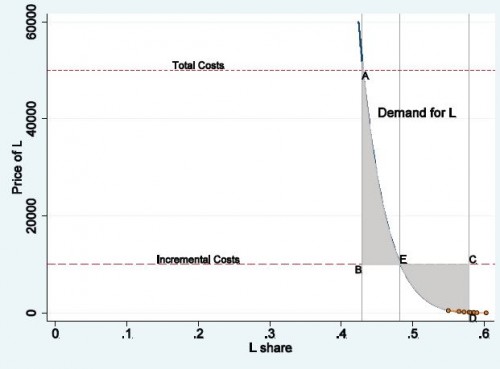 But, see those seven dots in the lower right? Those are the data points from which the entire demand curve is estimated. As the authors are fully up-front about, this is an extreme, out-of-sample extrapolation: variation in the travel-time-cost of radiation therapy doesn’t come anywhere near the full range of price over which the demand curve extends. In light of this, what I like about the paper is that it makes explicit some welfare issues pertaining to reference pricing. In terms of leveraging data to actually estimate the size of consumer surplus gain/loss, there are significant limitations.

A demand inducement spillover occurs when one payer reduces the prices it pays and providers respond by increasing the volume of services provided to other payers’ patients. […] A capacity spillover occurs when payments for one group of patients become more or less generous, and, as a result, providers adjust their capacity and change the volume of services provided to all patients. […] Providers appear to adopt a general treatment style that they apply to their patient populations, rather than tailoring treatments based on each patient’s coverage [a treatment pattern spillover].

Using data for 129 markets in ten states over years 1995–2009, White studied the effect of changes in Medicare hospital prices on

To give a sense of the magnitudes involved, we extrapolated our results to simulate the nationwide utilization effects of a 10-percent decrease in the Medicare price in 2012. That price reduction roughly matches the accumulated 10-year effect of the ACA on Medicare hospital prices. The reduction in the Medicare price leads to more than 1 million fewer discharges, and more than 9 million fewer hospital days, with the utilization reductions roughly evenly split between the elderly and nonelderly.

Unless hospital prices for the nonelderly go up considerably in response to Medicare cuts (and prior work shows they don’t) or utilization is shifted to other settings, this work suggests that Medicare price reductions might reduce health care spending beyond the Medicare program.

* If “consumer surplus” is a foreign concept, I recommend this short, accessible book.