Life expectancy is going down for many

Given my interest in life expectancy, and my desire to overcome the myth that its “meteoric rise” requires trimming benefits for the elderly, I simply cannot believe I missed this study from Health Affairs last summer. “Differences In Life Expectancy Due To Race And Educational Differences Are Widening, And Many May Not Catch Up“:

It has long been known that despite well-documented improvements in longevity for most Americans, alarming disparities persist among racial groups and between the well-educated and those with less education. In this article we update estimates of the impact of race and education on past and present life expectancy, examine trends in disparities from 1990 through 2008, and place observed disparities in the context of a rapidly aging society that is emerging at a time of optimism about the next revolution in longevity. We found that in 2008 US adult men and women with fewer than twelve years of education had life expectancies not much better than those of all adults in the 1950s and 1960s. When race and education are combined, the disparity is even more striking. In 2008 white US men and women with 16 years or more of schooling had life expectancies far greater than black Americans with fewer than 12 years of education—14.2 years more for white men than black men, and 10.3 years more for white women than black women. These gaps have widened over time and have led to at least two “Americas,” if not multiple others, in terms of life expectancy, demarcated by level of education and racial-group membership. The message for policy makers is clear: implement educational enhancements at young, middle, and older ages for people of all races, to reduce the large gap in health and longevity that persists today.

But this study does show that not only aren’t all people seeing the same gains in life expectancy, but that many are actually losing ground. Check this out: 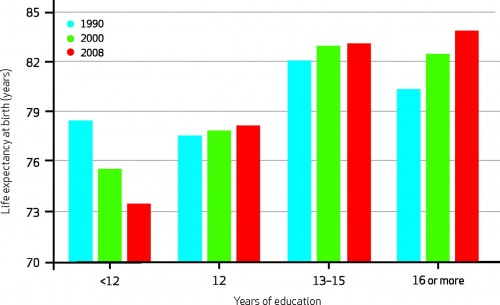 What you’re seeing is life expectancy by years of education for a white woman  at age 25 in three different years. In general, the more educated you are, the longer you can expect to live. But I’m more interested in the trends over time. The blue line is your expected life expectancy for these women in 1990, the green line in 2000, and the red line in 2008. If you’ve been to graduate school, your life expectancy has been going up quite nicely. If you’ve finished high school or been to college, the gains are less pronounced – but they’re there. The horror story is if you didn’t finish high school. Then, in just this 18 year period, your life expectancy dropped quite sharply.

The trends for white males  with less than a high school education were similarly bad. Ironically, Hispanic and Black people of both sexes showed that even in this under-educated group, life expectancy increased over time. The decrease? It’s a white thing. Remember that the next time someone tries to tell you that it’s minority groups bringing our population level statistics down.

There’s a huge disparity between the most and least educated among us. In 2008, 25 year old males in the former category had a life expectancy that was 14.2 years longer than those in the latter. For females, the difference was 10.3 years.

Not all of us are living longer. For many US citizens, life expectancy is going down. Remember that the next time someone tells you that we need to raise the retirement age, and that it’s not a regressive idea.

UPDATE: Sometimes it’s like you guys purposely forget that the Internet (and this blog) are forever. For everyone who disputes that life expectancy is going down for many, here’s this. From the past.