Kids are just the best 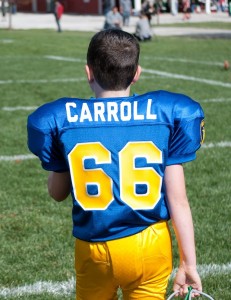 This is a purely personal post, so if you only come here for the health policy, stop reading now.

When you have kids, you want the best for them. As they grow and develop, you hope they turn out great. Deep down inside, you want them to be more capable than you. But every once in a while, it turns out they do something you didn’t even consider possible.

For all my father’s efforts to make an athlete out of me, I was a super-nerd. I was the shortest kid in my class through high school. In middle school, I wrestled in an “optional” weight class that was so low, many schools didn’t field someone in it. But I was persistent, and I held my own. And, to my father’s credit, it was good for me. I take a certain amount of pride in the fact that I can play lots of sports, and I don’t worry about being able to throw any balls around with my kids or know what’s going on.

But I live in the real world. In no way would I consider myself an “athlete”. So when I had kids, I assumed they’d be cut from the same cloth. Turns out that’s not the way it works.

Our middle child (Noah) is a giant; I don’t know where he comes from. He’s consistently one of the tallest kids in his class. He has half an inch and 7 pounds on his older brother. And the kid can play. First, he was a star on his basketball team. Last year, he demanded to play football.

Football was one of those sports my mother forbid when I was little. But all of Noah’s friends were playing, so we said yes. This year, though, when almost all his friends quit, Noah still wanted to do it. So every Saturday, he and I trudged out of the house at 7AM so he could warm up with his team before the 8AM game. That’s on top of the multiple practices a week he was already attending.

I’m not a sports guy. I like to go to games, and I will watch if forced, but I don’t really follow teams, and I have to fake interest all the time. A couple weeks ago, it had poured all night, and at 7AM it was shockingly cold. Jacob had just woken up and didn’t want to go. My daughter was still asleep. So my wife (a much bigger fan than I) bailed and told me to take Noah without everyone else. This was the first game the rest of them missed.

It was miserable. But all of a sudden, in the third quarter, the other team threw a pass. That doesn’t happen often in the third grade league. Completions are even rarer. So when the pass went up, we all were a little surprised. But no one was more surprised than I when Noah intercepted it.

The place went crazy. Noah started running back up field, and he made it 50 yards before they brought him down. His team was all over him. His coaches were losing their minds. And I found myself standing in water, screaming so loud my throat hurt. Noah was so proud I thought he’d burst.

My wife still hasn’t forgiven herself for missing it.

It’s so strange to watch my child excel at something I can’t even comprehend. I have no frame of reference. I don’t even understand half of what he’s telling me about what he’s doing.

More importantly, it’s forced me to realize that he’s his own person. He’s going to do things I can’t imagine. The same goes for Jacob and Sydney, both of whom exhibit traits that I don’t have.

I took the picture on the right (which alone justified the cost of the DLR camera) and blew it up to poster size for Noah to put on his wall. The truth of the matter is that I want it on my wall too. I know it’s “just” third-grade football. I don’t care. To see my name, worn by a kid who looks like me, doing something I never thought possible is absolutely, positively one of the most incredible feelings I can describe.

Being a parent is amazing, and never for the reasons you expect.