With Steve Jobs’ passing, organ donation and transplantation are in the news. Below I discuss a set of papers recently published in the Journal of Health Politics, Policy and Law that pertain to kidney donation and markets. Jobs had received a liver transplant. Some of the issues that arise due to scarcity of kidneys for transplant also pertain to livers and other organs. See the US Department of Health and Human Services organ donor website for more organ donor information.

Today, the waiting list for kidney donations is about 85,000 patients long and growing. Total transplants per year numbers 17,000, over 10,000 of which are based on kidneys from cadavers. The rest are live donations. The costs in treasure and lives due to a lack of kidneys for transplant are high. Medicare’s ESRD (kidney failure) benefit cost the program $24 billion in 2007, or nearly 6% of the entire Medicare budget. Each year about 4,500 individuals per year die waiting for a transplant. Financial compensation for kidney donation (or any organ) is prohibited by US law and opposed by many on ethical grounds.

The facts and figures above are from last month’s Journal of Health Politics, Policy and Law, which included several articles on the ethics and possible mechanics of kidney transplant markets. I read the paper by Rosen, Vining, and Weimer (pdf working paper here), as well as the two commentaries. In their commentary, Richard Hirth and Robert Merion did a nice job of summing up Rosen et al.’s proposal. 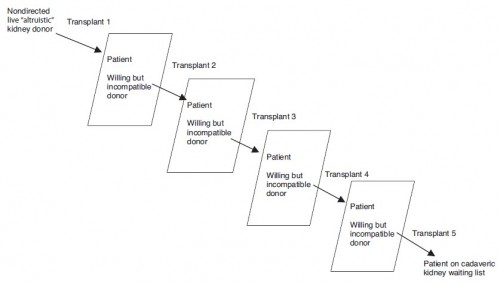 Under [their] proposal, a transplant center or consortium of centers would line up a chain comprising pairs of otherwise incompatible voluntary donations. [See figure above, from Rosen et al.] This chain would be “seeded” by paying a living donor, whose kidney would be used to initiate the first of a series of cascading donor substitutions for downstream incompatible pairs. Specifically, a kidney from the voluntary but incompatible donor from the first pair would be used to transplant the compatible recipient in the second pair. This process would continue until no more pairs can be identified in which the donor in the previously incompatible pair is compatible with a recipient in a subsequent pair. The chain ends when the voluntary donor from that last incompatible pair donates a kidney that is allocated to a person in the existing deceased-donor recipient pool. Transplant centers would compete for the paid seed organ on the basis of having assembled a longer chain than those of other centers.

This system has three notable merits. First, aside from the substantial hurdle of requiring federal legislative relief to enable payment to the seed donor, the system builds naturally and incrementally on evolving innovations in the existing system for paired and chain donation. In response to the shortage of deceased-donor organs, directed living donation became more prominent until peaking in 2004. However, directed living donation faces an inherent limitation: the need for compatibility between donor and recipient. This need led to the idea of paired donation, in which compatibility is achieved by trading organs across two or more incompatible pairs. The paired-donation concept, limited by the need to find pairs with two-way cross-compatibility, led naturally to the chain-donation strategy that has begun to emerge. The longest known chain involved sixteen transplants […]. Further, the sorts of nonprofit organizations presupposed by the chain-auction system have already developed to facilitate paired or chain donation, albeit without any donor payment components at present. As for the second notable merit, building on the chain approach and using chain length as a bidding mechanism for the seed kidney has the potential to leverage the purchased kidney to maximize the number of transplants from a single chain-auction kidney. And third, because the donations that ensue following that of the seed kidney are unpaid, nonauctioned donor organs, the proposed system avoids (or at least reduces) the cost problem of paying for kidneys that would have been donated even in the absence of financial incentive.

They go on to comment on some of the limitations of the proposal:

Then there are the ethical considerations, which are not covered by Hirth and and Merion, though are in the paper by Rosen et al., as well as in a commentary by David Frankford. I imagine they will come up in the comments to this post. To prompt you, let me ask, what are your reasons (if any) as to why we should not pay for kidneys (or other organs) under any circumstances? Or do you think there are instances where exchange of kidneys (and other organs) for money is ethically acceptable and/or justified? How should we balance the ethics of cost in taxpayer money and lives (as given in the opening paragraph to this post) with the ethics of a kidney market? What do you think of Rosen et al.’s proposal?