It’s not just the soft drinks

Here’s one reason why: a new study entitled, “Beverage patterns among Canadian children and relationship to overweight and obesity“:

In short, this study was looking for a relationship between beverage consumption and obesity after adjusting for other factors. What did they find? First, here’s the unadjusted analysis. You’ll see age and sex categories in the left column. The other columns are the beverage cluster the children fell into, or the dominant beverage they consumed. For each age/sex group you get the percent of kids who are normal weight, overweight, and obese for each beverage. 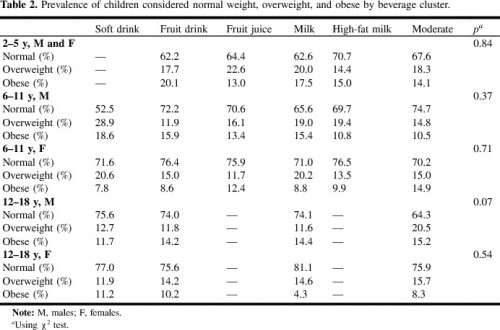 See a pattern? No? Me neither. For 6-11 yo females, being in the “soft drink” cluster gave you the lowest chance of being obese. Same for 12-18 yo males. But it’s all over the place. All of those p values on the right hand side show that in none of the age/sex groups was BMI classification associated with beverage cluster.

Here are the results of the logistic regression. For the record, they controlled for age, total energy intake, ethnicity, a measure of sedentary activity, and sociodemographic characteristics:

Only one result was significant. Soft drinks were found to be significantly associated with a higher odds of overweight and obesity in boys 6-11 yo. No other relationships were seen for any beverages (including soft drinks) and any of the other age/sex groups. Looking at the prevalences in the first table I showed you that’s not surprising. But I find it fascinating that this relationship is totally missing in the 12-18 yo males. This means that either it’s a totally new phenomenon in young boys, who will continue to be obese, or this relationship disappears as they grow older.

Regardless, it’s hard to look at these data and say that it’s definitively soft drinks that need to go. Why single them out? As I said on Wednesday, we need to fidn a way to get people to consume less calories overall, not from one beverage (halfheartedly) only in certain settings.