Is Traditional Medicare withering on the vine?

On Oct. 24, 1995, Newt Gingrich made an assertion about what would happen to Medicare if its beneficiaries could choose between it and private plans. Medicare is “going to wither on the vine because we think people are voluntarily going to leave it — voluntarily.” Though he later walked this statement back, many observers viewed it as an attack on the program.

In fact, over the nearly two decades since, Mr. Gingrich’s claim has undergone something of a test — and it has largely passed it.

In that time, Medicare beneficiaries have enjoyed various levels of access to private alternatives to traditional Medicare through the Medicare Advantage program and its predecessors. These private Medicare plans must provide at least the same level of benefits as traditional Medicare, though may offer more generous benefits voluntarily. They are subsidized by the federal government, often to the degree that many beneficiaries pay no premium even when receiving more benefits than they would from the traditional program.

Federal financial support for these alternative plans has waxed and waned, and enrollment in them with it. When government payments to plans were lower — as they were in the early 2000s — fewer plans participated, and those that did offered relatively less generous benefits; enrollment declined. When government payments to plans were higher — as they were beginning in the mid-2000s — enrollment increased.

Today, 30 percent of Medicare beneficiaries are enrolled in a Medicare Advantage plan, more than at any time in history. In some states, like Hawaii and Minnesota, about half of Medicare beneficiaries are in such plans. This is despite the fact that government payments to plans were cut by the Affordable Care Act. They’re down eight percentage points from their peak in 2009, as measured relative to the cost of traditional Medicare coverage. Still, taxpayers pay more to cover a beneficiary in Medicare Advantage than in traditional Medicare.

The surge in Medicare Advantage enrollment seems surprising. With payments to plans cut by the Obama administration, history suggests enrollment should go down, not up. What, then, could explain the growing popularity of private Medicare plans? 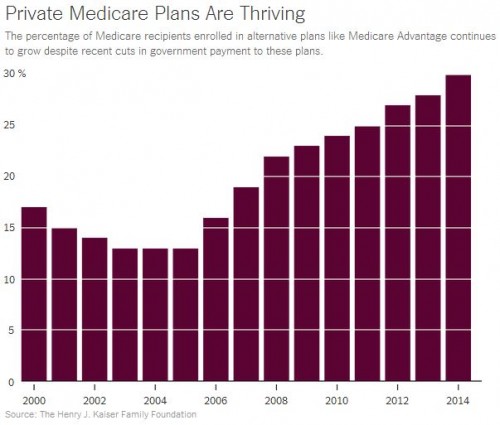 One answer is that baby boomers, who are just entering Medicare-eligibility age, are more accustomed to the types of insurance Medicare Advantage offers, such as H.M.O.s, than their predecessors were. Newly retired Americans have probably been enrolled in similar, employer-based plans for years if not decades — perhaps by the very same companies that offer Medicare Advantage plans — making it a relatively easy choice to enroll in such a plan for Medicare coverage. Older beneficiaries, in contrast, may be more accustomed to the fewer restrictions that traditional Medicare offers.

Another answer is that prior generations of retirees may have been more likely to have had coverage from former employers that wrap around traditional Medicare, filling in its gaps. This coverage has become less common as employer-sponsored retirement benefits have eroded generally. Since Medicare Advantage plans generally offer extra benefits, financed by the generous government subsidies they receive relative to traditional Medicare, perhaps new retirees are turning to them in greater numbers for more complete coverage.

No matter the reason, what’s clear is that Medicare Advantage is a strong and growing program, despite recent moderation in government subsidies. As it grows, traditional Medicare necessarily shrinks and its influence on the American health care system weakens. If the trend continues, policies, including those in the Affordable Care Act, designed to use traditional Medicare as a tool to reshape health care delivery for all Americans may become less potent. Is there a tipping point at which traditional Medicare ceases to matter?

If so, we’re probably not there yet, but we may be moving toward it. Unless things change, the data suggest Mr. Gingrich may have been right in a way: Given a choice between traditional Medicare or more benefits from more highly subsidized private plans, Medicare beneficiaries may well be willing to let the former wither on the vine.