Is cancer overdiagnosed and overtreated?

There’s a simply fantastic Viewpoint in this week’s JAMA that addresses that issue. The basic premise is that over the last 30 years there’s been a real emphasis on “awareness” of and screening for cancer. The idea has always been that this will lead to earlier detection and fewer deaths from cancer. I have argued here repeatedly that this has often led to a much larger increase in diagnosis (and therefore treatment) relative to any declines in mortality.

This is mainly because not all cancer is the same. Some of it might never progress to becoming dangerous. Screening, therefore, picks up cancer that really didn’t need detection. This leads to treatment, and all its negative consequences, without any actual gains in mortality.

This piece provides some hard numbers, which I’ve turned into a handy chart: 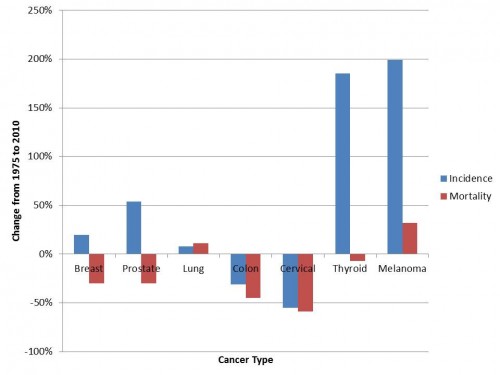 There are three basic patterns here. The first is evidenced by breast and prostate cancer. In both of these, diagnosis has gone up, but mortality has dropped by a potentially reasonable amount. That’s good! The problem, though, is that this is really due to improvements in therapy more than in “early detection”. In breast cancer, for instance, screening is likely contributing to only about a third of the total reduction in deaths. So… not as clearly good.

The second pattern is seen in colon and cervical cancer. In both of these cancers, screening often finds pre-cancerous lesions that can be removed, thus preventing cancer. Screening actually decreases the incidence, and also decreases the mortality. That’s just good.

The third pattern can be seen in thyroid and melanoma. The diagnosis of thyroid cancers has gone up by 185%. Mortality has only dropped by 7%. This means that we’re detecting – and treating – a ton of cancers that just don’t need it. With respect to melanoma, both incidence and mortality have gone up, but while the diagnosis has almost tripled, mortality has only gone up by a third. Some of the increases can be blamed on too much sun exposure, likely, but a lot of the screening is leading to significant numbers of diagnoses and treatments without associated reductions in mortality. That’s bad.

This is not to say that we shouldn’t screen for cancer, and the authors have a number of ideas on how we can do so more intelligently. But we need to come to grips with the fact that “early diagnosis” does not always equal “cure”. All cancers are not the same. Sometimes, screening can do harm.