In health care, the US is on a different planet

This week’s reading included a 2009 paper by Henry Aaron and Paul Ginsburg titled Is Health Spending Excessive? If So, What Can We Do About It? It’s worth reading, and since an ungated pdf is available, I’m not going to unpack it. However, I want to share the contents of one table and two charts. (Scroll way down for the charts. Worth it!)

Exhibit 1 of the paper asks and answers some good questions about the US health system. Here’s all that in Q&A format.

Q: Does the U.S. spend more per capita than other countries?

Q: Does the U.S. spend more per capita than other countries after adjusting for income and other factors?

Q: Has per capita U.S. health care spending risen faster than that of other countries in recent years?

A: More than some, less than others.

Q: Has the excess of health spending growth over income growth been higher in the U.S. than elsewhere in recent years?

A: In general, yes, but by varying amounts and not uniformly.

A: Yes, but evidence on how much is poor.

Q: Does the U.S. spend more on low- or no-benefit care than other countries?

A: We don’t know, but our larger outlays mean that we could waste more.

Q: Does the U.S. pay higher prices for health care services than other countries?

Q: Does the U.S. pay more for health care services, adjusting for quality, than other countries?

A: Almost certainly, although measuring—and even defining—quality is difficult; in some dimensions, we seem to be doing very well (length-of-stay, cutting-edge procedures); in others, poorly (delivering recommended care, control of diabetes); we have few data from other countries.

A: Static: if one could target cuts, yes; if not, no. Dynamic: if cost limits improve targeting of research, yes; if not, could be harmful.

A: Yes; were it not for projected increases in health care spending, no material long-term gap between revenues and expenditures under current policy would exist.

Below are the two charts. They compare life expectancy and infant mortality of US states to OECD countries, both graphed against per capita health spending. Some things I already know about these types of charts, but I bet you they’ll come up in the comments anyway: They don’t prove causality. There are objections to infant mortality comparisons based on how they’re measured by country. These are just two (correlated) population measures. There are many others that possibly relate to health care quality and costs. They don’t control for lots of other relevant differences between the US and other countries (or among states, for that matter). There are lots of reasons we have high spending and less than stellar population health in the US. In fact, Aaron and Ginsburg discuss them. If it makes you feel any better, don’t apply any interpretation to the charts at all. Just gaze at them in stoic amusement, as illustrations of some random cuts through data.

As for me, I still think they are nice illustrations of what many other measures suggest, which is that the US is in a very different (not good) place than other, wealthy nations when it comes to health care spending and population statistics related to health. It’s almost as if there is health and health care on planet Earth (or the wealthy parts thereof anyway) and then there is US-style health and health care, more costly and less effective on a population level. If you want to see vastly more about US health spending and quality see Aaron Carroll’s excellent series on those topics. 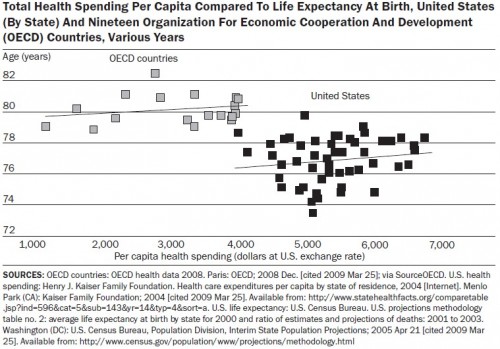 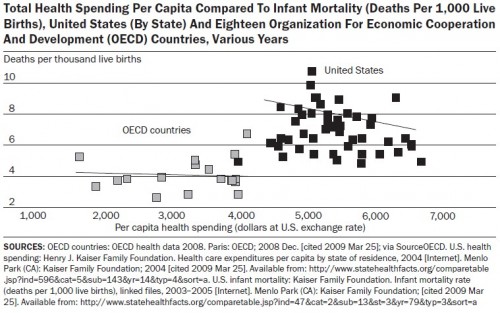