If you care about research, you should care about federal data suppression

Today, the Journal of the American Medical Association published a research letter from Kathryn Rough and her colleagues putting hard numbers on the consequences of SAMHSA’s data suppression. The letter vividly demonstrates what Austin and I have been saying for the past couple of years: that scrubbing Medicare and Medicaid data of any records associated with substance use disorders will wreak havoc on research into vulnerable populations.

The study design was simple. A bunch of diseases are associated with substance use disorders: Hep C, HIV, depression, anxiety, and the like. Rough and her colleagues counted how many people were diagnosed with these diseases before and after CMS started scrubbing its Medicaid data. The results were dramatic. 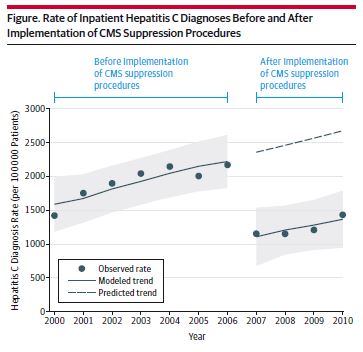 You see similar discontinuities (with various degree of statistical confidence) for all of the diseases they investigated that were associated with substance use disorders. In 2006, for example, about 2,076 per 100,000 Medicaid beneficiaries were diagnosed with HIV. But if you look at the scrubbed 2007 data, that figure plummets to 1,254 per 100,000.

Did Medicaid beneficiaries magically stop getting Hep C and HIV in 2007? Nope. The researchers checked diseases that aren’t as closely associated with substance use disorders. You don’t see the same discontinuity there—strongly suggesting that the data suppression, and not something else, is driving the skewed results.

So the data suppression is a huge problem for health-services research. As the letter says,

Underestimation of diagnoses has the potential to bias health services research studies and epidemiological analyses for which affected conditions are outcomes or confounders. In studies of health care utilization, the number of missing claims may vary in a nonrandom fashion between groups defined by demographics, disease, or locality. Comparisons between groups may lead to spurious conclusions—a hospital that regularly admits substance abusers will have artificially low rates of readmission, giving a false appearance of better performance.

Fortunately, SAMHSA has now proposed a rule that, if adopted, should stop the data scrubbing. If you care about research, and if the results of this JAMA study worry you as much as they worry Austin and me, tell SAMHSA that you support its proposed rule change. It’s easy: here’s the link. Stand up for research!

Nicholas Bagley is a professor at University of Michigan Law School, where he teaches and writes in the areas of administrative law, regulatory theory, and health law. Prior to joining the Law School faculty in 2010, he was an attorney with the appellate staff in the Civil Division at the U.S. Department of Justice, where he argued a dozen cases before the U.S. Courts of Appeals and acted as lead counsel in many more.