I mean, if you believe epidemiological evidence translates into causality…

I mean, if you believe epidemiological evidence translates into causality… have I got a study for you.

They used data from the University of Michigan Health and Retirement Study, which is a longitudinal panel survey, run since 1998, of more than 29,000 adults who are at least 50 years old. This analysis included data from four waves spread over 6 years. Specifically, they looked at patients who had received cardiac surgery while in the study.

The findings? Of the 1026 participants, 2.9% died and 21% survived but developed a new dependence. Let’s break that down by marital status; 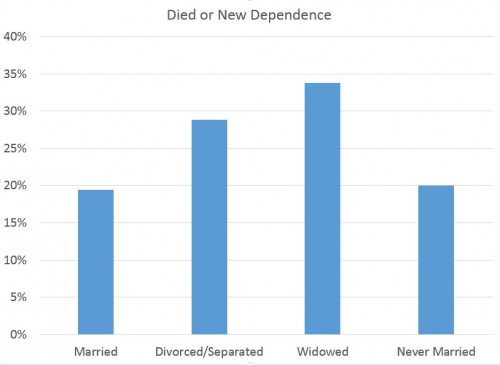 Now, as an association, I can totally rationalize this. Perhaps people who never married had developed skills to function completely independently than those who had gotten married. Perhaps those who were newly not married had become dependent or symbiotic in such a way that made it hard for them to function as well indepently. Or maybe they were sad or depressed. Or maybe there’s some other factor I can’t think of that made them different. I believe the result, and I find no fault with the analysis or the paper.

But screw that. This week, a lot of people have taken epidemiologic data and argued that it’s causal. So be it. Perhaps someone or some group would like to make a proclamation for better heart health. Either never get married, or if you do, never be unmarried again. It’s going to increase your chance of a good heart health outcome by at least 50%. That’s way more than the relative risks I’ve seen others using this week.

@aaronecarroll
P.S. This is clearly snark. I know that it’s possible to do epidemiological analyses that can get you closer to “causation” than a simple statistical test for association. But many of studies people are looking at this week aren’t nearly as sophisticated as that.
Chevron-circle-left
Chevron-circle-right