I bet you’re getting a subsidy for your health insurance, too – ctd.

This post is co-authored by Aaron Carroll and Austin Frakt

We’re getting a strange amount of pushback from people who deny that their employer-sponsored health insurance is “subsidized”. Some deny that a tax deduction is a subsidy. Some deny the existence of “tax expenditures” at all. 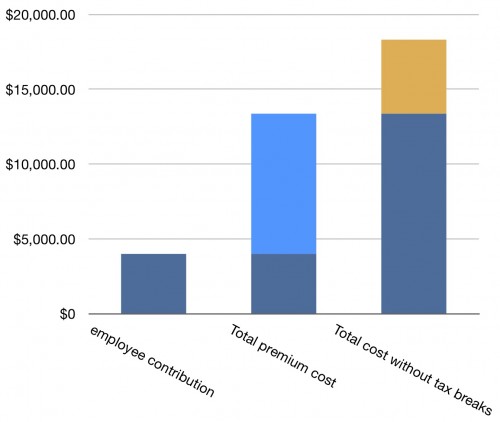 The first column is the average employee contribution to health insurance. It’s the amount you see deducted from your paycheck every year for health insurance, if you’re an average worker.  The second column is the average cost for an employee sponsored premium. You see the dark blue part, which is your contribution, and the light blue part, which comes from your employer. So far, so good. You have a job, and you feel you earned that light blue portion as a benefit. If others want this awesome deal, they should get jobs, too.

But here’s the thing.  That middle column is, currently, not taxed. No federal income tax, no Medicare tax, no Social Security tax, no State tax. No tax.

If you didn’t get this deal, in order to afford the same insurance (if you can even find it at the employer-based price, which likely you cannot), you would need to make as much as in the right column, on average. It’s 37% more than the middle column. And that assumes an average federal marginal income tax rate of 20%, which is a bit low overall and certainly low for workers, on average. So, this is a conservative estimate.*

You can choose to believe that this isn’t an “expenditure” and that you’re not getting a subsidy. But you’re getting a huge amount of extra money in your paycheck that a self-purchasing or unemployed person is not. Give us a good reason why that’s fair. If it’s not, then either we should eliminate the preferential treatment of employer-sponsored insurance or we should provide a similar benefit to those without access to it.

The latter is not so terribly different in spirit from the types of subsidies that will be offered under the ACA or from Medicaid- or Medicare-financed coverage. Where these other government subsidies do differ from the employer-sponsored insurance tax subsidy is in their degree of progressivity. Is it wrong for the wealthier to pay more than the poor for decent access to health care? Is that the objection?

Total Medicaid spending per person is about $6,300. Do you know what the average cost of the employer-sponsored tax subsidy is? You can read it off the graph above as the difference between the right-most and middle columns. It’s about $5,000. And, remember, this was a conservative (low) estimate.* Yes, it is lower than what is spent on behalf of an average Medicaid beneficiary, but not by as much as you might have thought. It’s almost like most workers are on welfare. We bet you never thought of it that way.

UPDATE 2: Fixed a point on self-employed people. If you file the correct forms, you can get the subsidy.