How well does Medicare’s physician fee schedule control costs? It sounds like the set-up for a joke. But I’m not going to deliver a punch line. Instead, in true TIE form, I’ll deliver some data and charts. (Some readers will recognize this material from an earlier post. But there’s been a new development that changes the story. Hence, this revision.)

We all know that Medicare has a physician fee schedule, the basic structure of which governs how private insurers pay physicians as well (which is not the same thing as saying private plans pay physicians the same rates as Medicare; they don’t). It’s the overall growth in Medicare physician fees that is the subject of much, and frequent, debate: the “doc fix.”

About that, late last year Uwe Reinhardt posted some intriguing graphs that illustrate what a mockery the doc fix issue and the system it aims to “fix” have made of the control on costs they’re supposed to exert. Here’s one graph he presented: 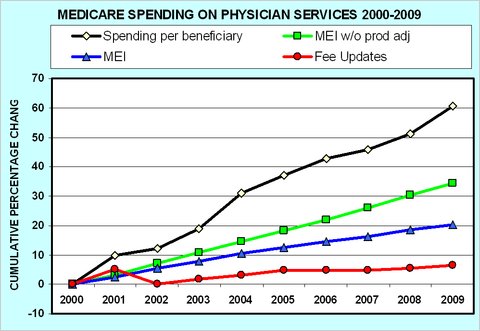 [T]hat line is so much lower than the green line, which represents growth in the M.E.I. [Medicare economic index], the index that measures the annual increase in the cost of operating a medical practice. […]

Indeed, even if one assumed that the M.E.I. should be adjusted downward a bit because physicians should be able over time to increase the productivity with which practice inputs are used, basing fees on the productivity adjusted M.E.I. (the blue line) would still have raised Medicare’s physician fees substantially more than the actual fee increases.

Finally, however, the top line (in black) shows that, in spite of Medicare’s miserly fee updates [the red line], total Medicare spending on physician services per Medicare beneficiary actually has grown by fully 60 percent from 2000 to 2009, at an average annual compound rate of 5.4 percent.

(By email, Reinhardt wrote me that he believes the figures in the chart are not adjusted for overall inflation. That’s the new development, and it is an important one.)

What’s driving that huge increase in physician services spending? Not fee levels (the red line), but utilization. Medicare’s inability to control utilization is, by now, a familiar bugaboo of its payment system, the very reason for proposals of bundled payments, ACOs, and the like.

Since private plans piggyback on the structure, though not payment levels, of the Medicare physician payment system, I wondered how the rate of increase in spending by them compared. Unfortunately, after much searching, I could find no figure comparable to the one produced by Reinhardt, above. So, I made my own, using National Health Expenditure data for private plan physician spending and OECD/Census data for number of people insured by such plans. Here’s the resulting figure: 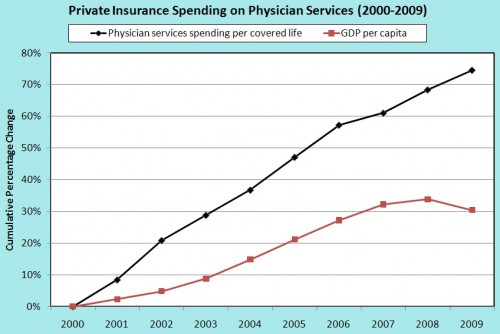 The black line is cumulative (nominal) growth in private plan spending on physician services per covered life. The red line, for comparison, is growth in (nominal) per capita GDP. Physician spending by private plans has far outpaced overall economic growth in the last decade.

Comparing the two figures above, private plan physician spending growth is above that of Medicare. So, perhaps Medicare’s controls on fees do have an effect, though clearly a modest one. In other words, if one wishes to take the forgoing as evidence of success or failure of Medicare cost control, it’s more the former than the latter. Medicare beats private plans.

There are a lot of caveats. First, were talking about two totally different populations. However, I would have thought this would break in favor of private plans. Many seriously ill non-elderly are not insured privately, but are on Medicaid. If the sick would otherwise use more intensive services over time, private plans are somewhat protected. Not so Medicare. Also, what’s illustrated for Medicare is based on FFS spending, ignoring the Medicare Advantage program. However, if MA tends to siphon off better risks, that should make the Medicare picture look worse. For all that, Medicare’s physician services spending growth is lower than that for private plans.

On average, and based on the evidence above, it does appear as if Medicare is able to exert greater cost control than private plans, at least for physician spending. This is not a deep analysis, just a few, descriptive graphs. If there is opposing or supporting evidence on this point, feel free to offer it.