How unusual is Medicare’s geographic variation?

CBO’s 2008 Geographic Variation in Health Care Spending is a fantastic, if ever so slightly dated, review of the health care spending geographic variation literature. The text itself covers all the important angles, and Table 1 lists many relevant papers. All in all, it’s a great way to get up to speed on this topic.

The report also includes an interesting comparison of geographic variation of Medicare spending to that of other goods and services. I turned the key results from the table on page 7 (box 1) into a graph, below. The “coefficient of variation” (vertical axis) is the standard deviation divided by the mean. It’s a measure of how much variation there is, relative to the overall level. The blue bars are uncontrolled variation: just the raw data. The maroon bars are variation after controlling for income. The universe is 24 large metropolitan statistical areas (see report for details). 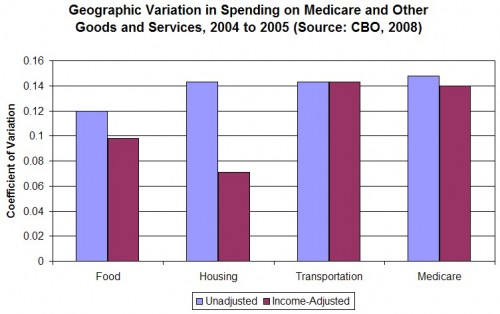 What I find interesting about the chart is how unimportant income is in explaining variation in Medicare or transportation and how close in value the coefficients of variation between those two categories are. It makes me wonder, how unusual is observed geographic variation in Medicare spending? Are there other goods and services that vary as much? Are those variation explained by similar things (income, supply factors, demand factors, etc.) to the same degree? Has there been any other work on this?

Note that the above does not imply that variations in Medicare spending are unimportant or unworthy of attention. As the authors of the CBO report write,

Although the variation in Medicare spending is not completely out of line with that observed in other sectors of the economy, it does warrant closer examination. It is reasonable to assume that the value of the goods and services consumed in most other sectors is readily apparent. For example, if people in a given area spend a relatively large amount on housing, it is reasonable to assume that they are aware of the attendant benefits (for example, the area might provide better job opportunities, have a mild climate, offer access to cultural amenities, or have good public schools) and they choose to spend more as a result. That assumption does not necessarily hold for health care. Health care providers usually have a strong influence on the choice of treatment, and the quality or value of the benefits received from higher spending is much more difficult for patients to discern.

In other words, to a larger degree than for other goods and services, variations in Medicare (or,  health care) spending should remain even after controlling for things that patients can readily observe and understand. The question is, is this empirically verifiable?