How reasonable is the White House’s marketplace enrollment goal?

This is a guest post from Adrianna McIntyre, a graduate student studying health policy at the University of Michigan. Adrianna currently blogs at Project Millennial, tweets at @onceuponA, and will be joining TIE this fall as the team’s first intern. The analysis was conducted with generous assistance from Josh Fangmeier, a health policy analyst based in Ann Arbor.

There’s been lots of fuss about young adults and Obamacare, from the bro-tastic “rate shock” debate to more recent coverage of White House outreach efforts (you should read Ezra Klein and Sarah Kliff on that). As a bona fide twenty-something, you could say I have a vested interest in the matter.

One figure that’s been bandied about is 2.7 million—the alleged magic number of 18-35 year olds required to keep premiums stable in the new marketplaces (the new term for “exchanges”). That number comes from the White House, though I’m not sure how they arrived at it or how important it really is. But let’s accept it for the sake of argument. Is it a reasonable goal?

It’s worth understanding how the target population—young adults who are uninsured or currently have nongroup insurance—breaks down. About 25 million people between the ages of 18 and 35 match that description, stratified below along age and income bands important to the health law. 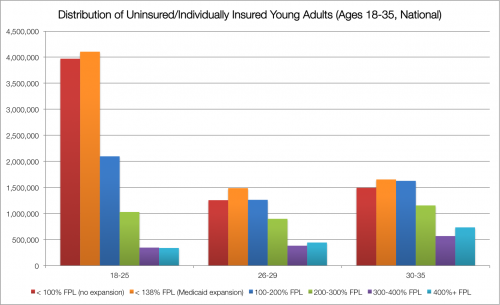 The red bars represent the number of young adults living below the poverty line in states opposed to expanding Medicaid—they won’t receive Medicaid coverage, nor will they qualify for marketplace subsidies—while the orange shows how many adults in expansion states are expected to enroll in the program. These numbers will include “woodwork” individuals who are currently eligible for Medicaid but have not signed up for coverage.

Age matters, too. Individuals under 26 can stay on their parents’ insurance, if the plan includes coverage for dependents. Those under 30 have the option to buy catastrophic plans, though these plans are not eligible for subsidies like “metal-tier” plans—and recent insurance filings suggest that their premiums are quite similar to basic bronze plan alternatives. Catastrophic plans have separate risk pools, so they don’t count toward marketplace enrollment targets.

If we look at just the predicted marketplace target population—setting aside those who will receive coverage under the Medicaid expansion and those below the poverty line in nonexpansion states—we’re left with approximately 11 million adults between the ages of 18 and 35. The White House target is about a quarter of that, though this doesn’t account for dependent coverage (about 4 million are under 26) or take-up of catastrophic plans.* Even so, this strikes me as achievable, especially since their incomes are predominantly below 300% FPL, meaning most will receive subsidies to offset the cost of premiums. 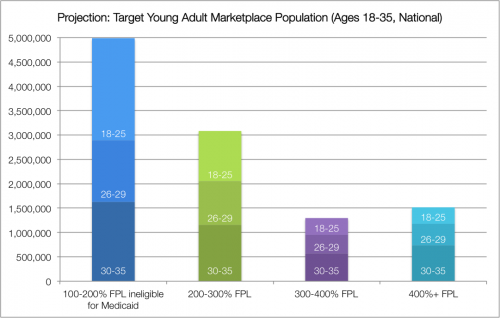 There are caveats to the Administration’s goal. Notably, marketplaces are state-based, so even wildly successful outreach to young adults in Connecticut and Oregon won’t do a thing for my premium in Michigan. Additionally, the messaging about how we “need” 2.7 million young adults uses “young” as a proxy for “healthy”. Enrolling healthy adults, across all age groups, is what would really keep premiums down in the marketplaces.

I do have some lingering concerns about the scaling-up of marketplaces—the CBO estimated that enrollment would grow from 7 million in 2014 to 24 million in 2016. If actuarial estimates suggest that we need to maintain a certain ratio of young-to-old, the fact that young adults disproportionately benefit from the Medicaid expansion and extended dependent coverage could put stress on the marketplaces.  Future decisions to expand Medicaid will shift adults between 100-138% FPL from marketplaces into the public program; in states that currently oppose expansion, there are about 1.5 million 18-35 year olds in that income band.

I’m optimistic that the White House will reach their 2.7 million target. Even if I’m wrong, I think it’s an overreach to suggest that success of the entire health law hinges on this figure. Marketplace premiums have risk-selection assumptions built in—what matters is that actual enrollment matches those assumptions, not the Administration’s goal.

Note to ultrawonks: You can access a description of the methodology used to compile relevant Census data here, and a spreadsheet of the data itself here.

* UPDATE: The provision extending dependent coverage up to age 26 went into effect in September 2010, before this ACS data was collected. It is possible that more uninsured or privately insured individuals have taken advantage of that option since this was collected, which would reduce the number of 18-25 year olds likely to seek coverage on the exchanges. Additionally, it’s possible that some 18-25 year olds in the nongroup market are dependents on a parent’s nongroup plan. The under-26 requirement only extends to plans that already offer dependent coverage.