While many of you have likely heard of some of the previous metrics before, I suspect that some of the ones presented today will surprise you.  We’re going to start getting into actual performance here, as well as how the system succeeds while in action.  We’re going to look at utilization, or how much people use, or get to use, the system.

Let’s start with some data on prevention.  Specifically, we are going to focus on immunizations.  The first is known as DTP, or diphtheria, pertussis, and tetanus.  If you want to get technical, these days it’s mostly DTaP, as we are now using acellular pertussis, but that’s besides the point.  You’re supposed to get five vaccinations by the time you enter school.  So how does the US stack up in keeping kids current by age 1-2 years ? 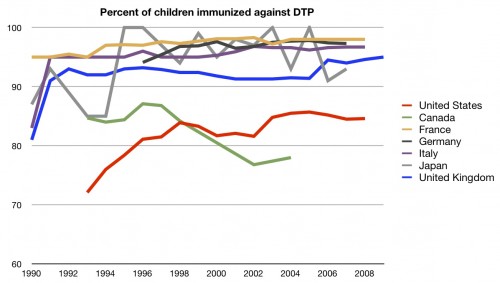 Better in recent years, but still nowhere near the top.  In fact, we seem to have plateaued at around the mid 80’s.  We could do much, much better.  Data exist on more than DTP, however.  We can also look at immunizations for measles.  This series is much simpler than DTP, and only requires two vaccinations by school entry.  In the US, we try to have one dose in by 15 months of age.  How well do we do at that compared to other countries: 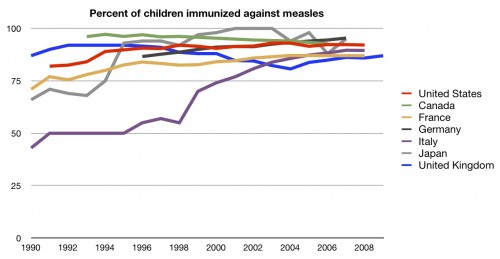 Better!  In fact, in recent years, we are near the top.  Children aren’t the only population that should be immunized, however.  People over the age of 65 should be getting vaccinations against influenza each year.  How do countries compare on that metric? 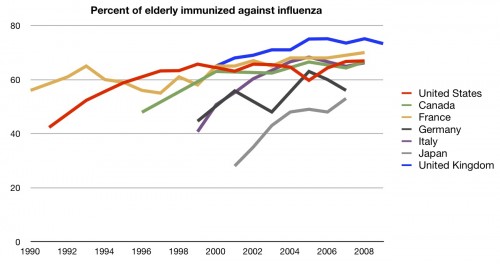 Middle of the road there.  As always, with the elderly, it’s important to remember that they function in a different system, one of effective universal coverage because of Medicare.

Moving past preventive care, let’s head into ambulatory care.  How many times do people in the US get to see the doctor compared to other countries? 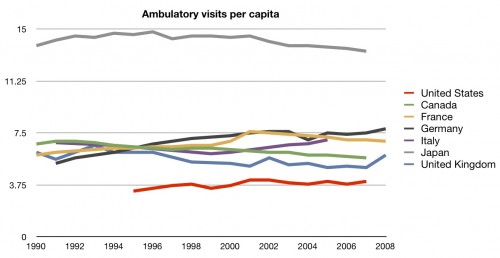 I have to admit, this one surprised me.  Making no claims as to whether every visit in every other country is needed (remember, no one metric is perfect), knowing how much more we are spending than these other countries makes the fact that they see the doctor many more times was surprising.

How about outpatient surgery?  Do we get more than that? 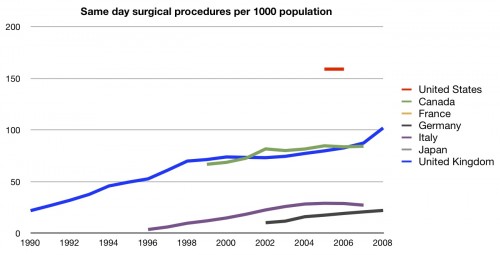 You bet we do.  Even though there isn’t a whole lot of data for the US, we are clearly out front there.  We do a lot of same-day procedures (which we saw in the cost series).  A lot.  Is it the same for inpatient procedures?

Still number one, but not by as great an amount.  Certainly there is no question that we are getting many more procedures than any other comparable country. 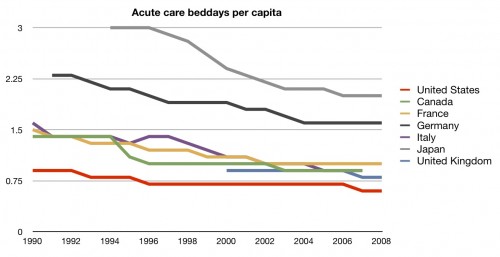 Again, given our costs, it’s surprising that we spend the least amount of time in the hospital.  Remember, we’re doing the most procedures.  We just don’t get to stay long afterwards.  Many people don’t like that.

We should look at this from more than one direction.  Maybe we get longer stays, but fewer of them? 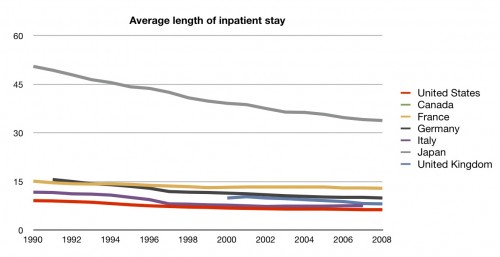 Not so much.  The average length of an inpatient stay in the US is shorter than any comparable country.

So how do we do with actual use of the system?  With respect to prevention, we’re middling.  We hardly get to see the doctor in the office at all.  We do get a lot of procedures, both inpatient and outpatient, although we rarely get to stay in the hospital, and when we do it’s for much less time than other countries. 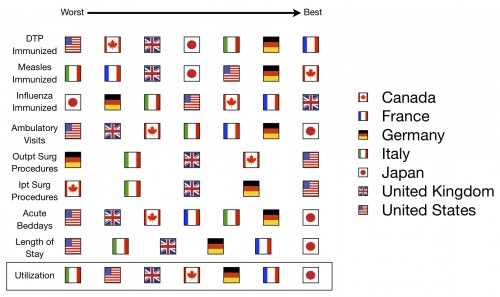 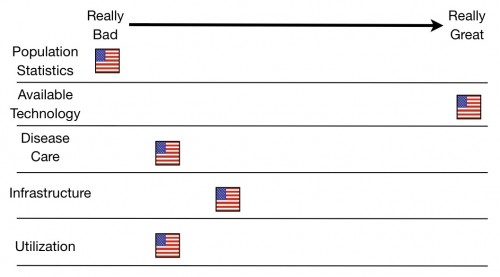 UPDATE: I screwed the pooch on this one.  Thanks to Michael in the comments, I fixed it.  I got the rankings exactly backwards in the overall category and running total.  I’ve been traveling and I’m sleep deprived and I’m human.  The responsibility is mine, however, and I own the mistake.