How do babies gain or lose weight? With data! 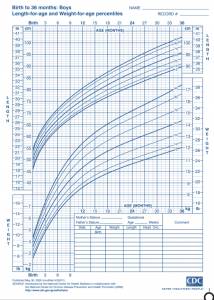 Austin has been on me more than usual recently for not talking about my own research enough. He’s not wrong. I posted a long and complicated paper that I co-authored on Friday that had to do with the social contract and health care reform that begs for some blog posts. I’m going to work on that.

While you wait, here’s a more recent study we published, “The Natural History of Weight Percentile Changes in the First Year of Life“:

The Centers for Disease Control and Prevention and the World Health Organization have published growth curves derived from the z scores of cross-sectional data in children who have become an integral part of pediatrics. Children whose growth curves fall below these curves are said to have failure to thrive. Growth curves may be useful to determine whether a patient’s values are within a normal range, but they do not capture the longitudinal perspective essential for determination of health. We followed up patients longitudinally using a large outpatient electronic medical record to determine changes in weight percentile during their first year of life.

Every parent knows that when their kid goes to to doctor, we plot them on “growth curves” to show that they are growing well. Parents, and doctors, are obsessed with the things. They’re convinced that if their kid starts to “fall off the curve”, then there is a problem.

In fact, some people define dropping two percentile curves in six months to mean that a child has “failure to thrive”. In other words, it needs medical intervention.

What we did in this study was to look at the more than 9000 children in our CHICA EMR who had multiple growth plots in their first year of life. We found that 64% of babies dropped by at least 1 line over a year, and 38% fell by at least 2 lines. Only just over a third stayed the same or increased.

Moreover, 31% decreased two lines in a six-month period and would be diagnosed with “failure to thrive”.

This is important, because parents panic when they are told that their babies aren’t gaining enough weight. They start to over feed them and even supplement their diet with additional calories. I swear to you, the biggest problem in this country is NOT that babies (and kids) aren’t getting enough calories.

I doubt this isn’t the cause of the obesity epidemic in this country. But I’ve been railing against how we use “growth charts” in this country for some time. This is part of the reason why. Those charts may tell us that babies are “supposed to ” follow a certain curve, but data and evidence don’t support that belief.

We’ve got another paper that goes even further in taking apart the charts, but it hasn’t been accepted for publication yet. When it’s published, I’ll be sure to write about it.