How dangerous are cell phones to drivers?

So yesterday the NTSB recommended a national ban on cell phone use for drivers:

The National Transportation Safety Board recommended Tuesday that all states and the District ban cellphone use behind the wheel, becoming the first federal agency to call for an outright prohibition on telephone conversations while driving.

Distracted driving, some of it due to cellphone use, contributed to an estimated 3,092 deathsin highway crashes last year, according to the National Highway Traffic Safety Administration.

“No call, no text, no update, is worth a human life,” said NTSB Chairman Deborah A.P. Hersman. “It is time for all of us to stand up for safety by turning off electronic devices when driving.”

Regular readers of the blog will know that such language doesn’t sit well with me. As you know, the number one killer of children in the US is accidents, and yet no on ever says such things as “driving just isn’t worth killing so many children”.  Ignoring the comment, though, just how dangerous are cell phones compared to other distractions?

To get some actual data, I headed over to the NHSTA Fatality Analysis Reporting System’s Query Tool. I asked for the number of vehicles/drivers involved in fatal crashes 2010, broken down by distractions just prior to the crash. Here’s a graph of the output (click to enlarge): 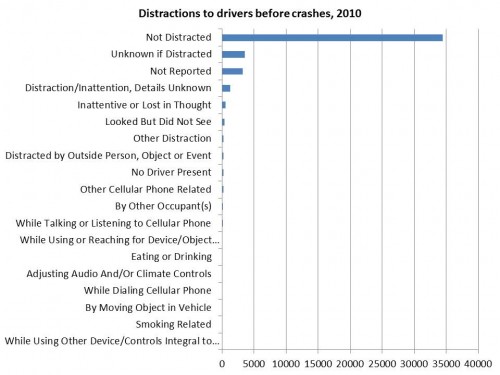 The first thing to note is that the vast majority of accidents (77%) don’t involve distractions. An additional 8% are categorized as “unknown if distracted”. Further large categories include “not reported” at 7% and “Distraction/Inattention, Details Unknown” at 3%. So that’s a total of 95% where there was no distraction, where it’s unknown if there was a distraction, or details of a distraction are unknown.

How do things look if we eliminate those categories? Like this: 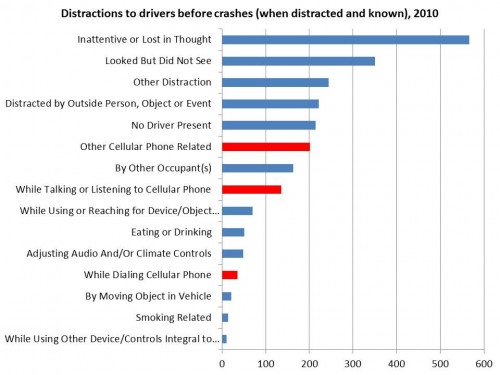 I colored in all cell phone related categories as red. Are they there? Yes. But even combined together, they aren’t close to as risky as being “lost in thought”. Altogether, in 2010, 373 vehicles/drivers were linked to cell phone related distractions. That’s less than 1% of all of them.

No? Why not? What’s the threshold for a nationwide ban? How many lives are too many?

I don’t know what the answer is. But I think that people who make declarative statements and set policy should be prepared to offer an answer. Alternatively, they could present the data in absolute as well as relative terms, and allow people to make their own decisions.