Yesterday I wrote about a study of emergency department visits within 30 days of a surgical procedure. Last night NEJM published a study, by Thomas Tsai and colleagues, on 30-day hospital readmissons after surgery. This surgery focus is motivated by the fact that the Medicare program is considering including imposing penalties on hospitals with high surgical readmission rates.

The paper is packed with findings. In brief, from the abstract:

So, hospitals with higher volume, lower mortality rates, and better surgical process measures (all traditional indicators of quality) had lower readmission rates. With respect to the volume findings, here’s a pretty picture: 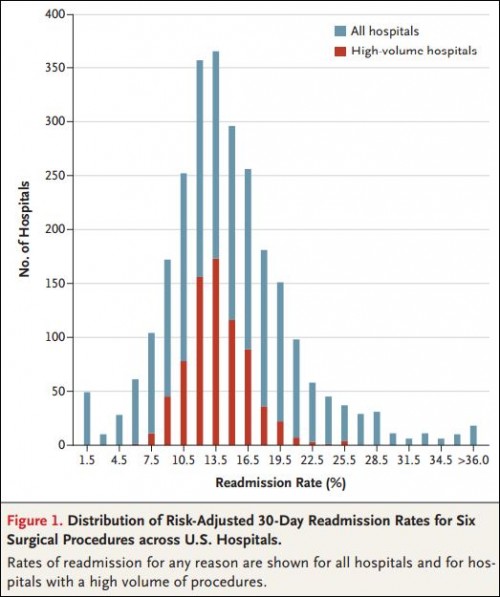 As readers might recall, hospital readmission rates for heart attacks, heart failure, and pneumonia are not as strongly aligned with mortality rates and other measures of quality. So, why the difference for surgical readmission rates? Tsai et al. explain: