This post is part of a series in which I’m dedicating a month to learning about twelve new things this year. The full schedule can be found here. This is month three. (tl;dr at the bottom of this post)

I can’t believe March is already over. This month was game theory. I learned one big lesson – I’m not that fond of game theory.

For some reason, I thought this would be fun, or something that would be intuitive and easy to do in my head. Instead, it turns out that game theory is much more of a grind it out mathematical thing. It’s my fault; my expectations were off. Also, if I never hear about the Prisoners’ Dilemma again, it will be too soon. Enough with the Prisoner’s Dilemma! At this point, I want to choose “confess” just to get out of the conversation.

That’s not to say I didn’t learn anything. I certainly did. For instance, I now get what John Nash was talking about in A Beautiful Mind when he figured out Nash equilibria (for which he won a Nobel Prize). Moreover, there were certain books along the way which were much more practical than others. You can all benefit from my experience. Let’s begin.

The first book I read was Game Theory 101: The Complete Textbook, by William Spaniel. It wasn’t a bad place to start. It begins, as all of these pretty much do, with the Prisoners’ Dilemma. It then builds off of that example in increasingly more complex matrices to illustrate different ways of determining Nash equilibria and optimal outcomes. You also get to learn about the many other classic games used to illustrate game theory, including stag hunt, matching pennies, chicken, ultimatum, centipede, hawk-dove, and the-one-where-the-couple-have-to-independently-decide-whether-to-go-to-the-ballet-or-a-boxing-match. There’s math, there are diagrams, and it’s pretty well described. If I had one complaint about this book, it’s that it’s a bit dry. I’m glad it was first.

Next, I turned to Thinking Strategically: The Competitive Edge in Business, Politics, and Everyday Life by Dixit and Nalebuff. This was much less dry than the first book. I was feeling pretty positive about it, until two books later. I felt even less positive about it once I got to Dixit’s textbook at the end of the month. Both were superior to this one. It did its best to make the subject relevant and interesting, but once it got to the usual “Prisoner’s Dilemma”, it lost a lot of its spark. 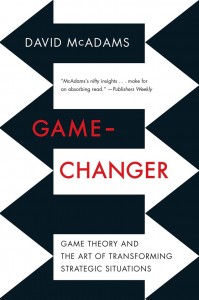 Game-Changer: Game Theory and the Art of Transforming Strategic Situations by David McAdams was a breath of fresh air (thanks, Peter Ubel!). This was the best written of all the books I read, immediately getting into real-world applications rather than focusing on the usual bread-and-butter games others do. This was the first book that got me thinking above simple games into actual strategy. Easy to read, and I got a lot out of it.

William Poundstone’s Prisoner’s Dilemma was a different kind of book. It was much more of a biography of John Von Neumann, one of the architects of game theory, than about game theory itself. If that’s what you’re looking for, you might enjoy this book. I wanted to learn about game theory more than the men behind it, so this was sort of lost on me.

Next, I tried Game Theory for Applied Economists, by Robert Gibbons. This might be a good book, but I can’t tell you. I should have peid more attention to the title. This is definitely written for skilled applied economists, because the math was way beyond what I wanted to do. Maybe I could have figured it out, but I wasn’t going to spend the time, as I had 8 books to read this month. It was very, very detailed and very, very complicated.

The Compleat Strategyst, by J.D. Williams is evidently a classic tome on the subject. I should have been tipped off by the oldey-English in the title. This wasn’t for me, either. It was too hard a read, and I couldn’t finish it. 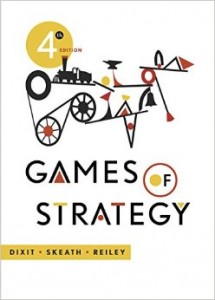 Finally, I read Games of Strategy, by Dixit, Skeath, and Reiley. This was an odd book to finish with, because it was the most comprehensive and thoughtful of the bunch. It was an actual textbook. The chapters were well designed, the examples were good, and I found it to be an easy read. If I had to pick one book to give you the foundation of game theory, this would be it. I’m glad I pushed my way through to the end of my list, because I would have missed this.

Finally, based on Austin’s recommendation, I watched ECON 159: GAME THEORY from the Open Yale Courses. You can read his post on the course. It’s totally worth it, but it’s a 25+ hour commitment, and I like plowing through books in a couple hours more than the time it took to go through all of the lectures.

So where does that leave me? Unlike previous months, I don’t feel like I learned any big lessons that will change what I do. I was already somewhat immersed in decision trees, utilities, backward induction, and decision analysis from my research. I didn’t realize how much overlap there was in game theory and this body of work. I also think that I’m a pretty good strategist, given my huge interest in games in general, as well as in human behavior. Maybe I’ve got a lot of this internalized without knowing all of the math and proofs behind them.

If I was ranking my three months so far, this would unfortunately be third. But that may be less of a comment on game theory as it is on me, and what I knew coming in. I’m looking forward to April!

tl;dr: If you want to read one enjoyable book, make it Game-Changer: Game Theory and the Art of Transforming Strategic Situations; if you are willing to read a textbook, then go with Games of Strategy; if you’re patient and willing to put in the time (or, if you hate to read), ECON 159: GAME THEORY is the way to go.