This post is part of a series in which I’m dedicating a month to learning about twelve new things this year. The full schedule can be found here. This is month eight. (tl;dr at the bottom of this post)

Best month yet. Hands down. That’s likely due in some part to the topic, but more so because the books I picked were just amazing.

Let me begin by admitting that my football knowledge before this month went not much further than what I picked up playing pick-up games as a kid. I know the rules. I know basic penalties. But I knew nothing of strategy. I thought you looked for an open man and threw it to him, or handed it off to a pre-ordained back and hoped for the best.

I also had little understanding of what coaches might do. Motivate players to run faster? Jump higher? I had no idea. 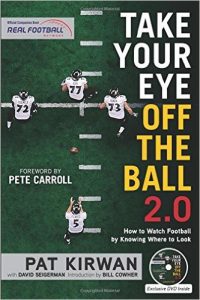 My basic knowledge was so poor that I had a couple false starts on books. I was so lacking in the fundamentals of positions and strategy that I couldn’t understand what I was reading. I almost gave up. After some trial and error, I finally started Take Your Eye Off the Ball 2.0, by Pat Kirwan and David Seigerman. Everything fell into place.

This book was simple enough to get my head around. It described the positions. It talked about how teams and coaches spent the week before a game (Did you know they rarely make contact in practice during the week? I didn’t). It described the generalities of the running game versus the passing game. It explained how football innovation is evolution, from offense to defense to offense to defense, etc. I learned the difference between the 3-4 and the 4-3, what defensive backs do, and why some teams pull in the nickelback and others put 8 men in the box. I learned why you might have three backs for some plays and extra receivers for others.

Then I read a pair of books written by Chris Brown of Smartfootball, which is evidently a site I need to frequent now. First up was The Essential Smart Football. He breaks up the book into four parts. The first (Characters) illustrates how some key defensive and offensive innovations highlight the importance of certain key positions. The second (History) followed some of the key innovations in strategy through time. The third (Theory) discussed some more, well, theoretical aspects of the game, from containment, to spiking the ball (don’t do it), to the no-huddle offense. The fourth (Concepts) takes a couple key football innovators and explains how their football philosophy and how it influenced the game.

There’s no way I could have understood this book without the first one. The next one could only have been read in progression as well. Also by Chris Brown, The Art of Smart Football. In this book, Chris discussed a variety of offensive and defensive theories and philosophies. I began to understand how different offensive packages, like the West Coast Offense, have come to prominence. He explained why blitzing emerged. Why the spread offense mattered. How old strategies, like those of Pop Warner, keep coming back. 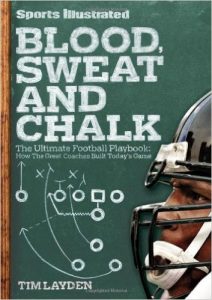 But it was the fourth book when all of it came together. Ironically, it was originally the book I tried to read first, and it was the book that almost made me quit. But after the groundwork was laid by the other three books, I was finally ready for it. And this book, Blood, Sweat & Chalk: The Ultimate Football Playbook: How the Great Coaches Built Today’s Game by Tim Layden is a masterpiece.

Each chapter begins with a standard football play diagram and a vignette describing how the play is meant to be run. The chapter then explains the history of the men who created or mastered the play, and how it changed football. What I loved so much was that now I could understand the diagrams, and now I could understand how the play worked. Layden’s genius is in how each chapter and play leads to the next, though. 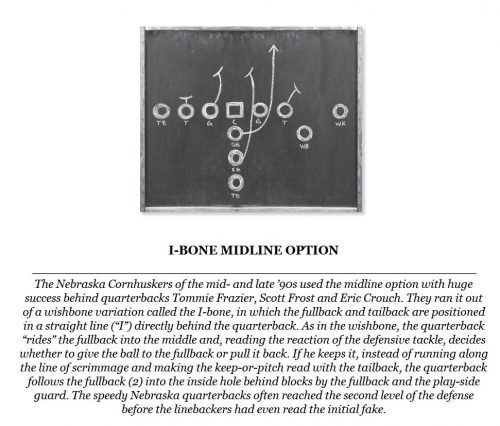 I understood why Pop Warner’s Single Wing was the mainstay of old-time running football. I saw how that evolved into the Wing T and then the Wildcat. It made sense that as teams adapted, offensives compensated by creating the option in the Wishbone and the I-bone formation. I got how Don Coryell transformed the game with more sophisticated passing routes and a new play-calling system. When defenses adapted, I nodded along as Bill Walsh surged forward with the West Coast Offense, using precise timing and routes.

There were some tactical geniuses in football. When defenses got good at the zone, enterprising coaches stretched them out both horizontally and vertically. Then Tony Dungy and Monte Kiffin learned to interrupt pass routes and improve the cover D with the Tampa Two. I remember Buddy Ryan as the coach of the Eagles when I was younger, but I never understood the innovation of his 46 defense for the Chicago Bears in the 80’s. The audacity of three men rushing the center and a full eight men in the box must have been terrifying for front lines and quarterbacks facing them. But even that may have been less off-putting than the unpredictability of the zone blitz that Pittsburgh rolled out in the 90’s or the Double A Gap blitz the Eagles perfected in the 2000s.

Most of all, I learned to appreciate coaching. I never realized how much they pored over details, understood their players, and worked on their teams over time. So many of these innovations were in response to the teams they had. Got a quarterback who isn’t a huge pass threat? Single wing may be for you. Is the defense covering your receivers too effectively? Get yourself a QB who’s a run threat so that they need to pull another man to the line to cover him. That not working? Teach the QB the option so that the line can effectively leave a defensive tackle unblocked.

Why are the Patriots so good? They’re running an up-tempo no-huddle offense to perfection. Brady is calling plays using the Erhardt-Perkins system that’s much simpler verbally than what other teams use, so he can make changes at the line without difficulty. Players can know their routes just by recognizing at which position they’re lined up. The team has immense versatility. They’ve got two tight ends that can serve multiple roles. Gronkowski can destroy defenders on pass plays and block the run just as well. Hernandez (until he went to jail) could catch a pass or run from the backfield. The no-huddle offense means they can all change roles, and the defense can’t substitute players.

If you’d told me any of that a month ago, my eyes would have glazed over. Now I can’t wait for Sunday.

tl;dr: The best book was (4). Unless you’re well versed, though, I’d read them all in this order -> 1) Take Your Eye Off the Ball 2.0, 2) The Essential Smart Football, 3) The Art of Smart Football, and then can you appreciate 4) Blood, Sweat & Chalk: The Ultimate Football Playbook: How the Great Coaches Built Today’s Game.

P.S. Eagle-eyed readers will notice I never mentioned book #5. It was The Football Coaching Bible, and it’s more of a how-to book on how to coach a team. Good book if that’s your goal, but it wasn’t mine.