The revealed preference of participants in health policy debates is now clear, isn’t it? It’s not to reduce costs. It’s not to improve quality. It’s not to boost access. How could it be? If it were those alone, we’d have settled things by now. That we haven’t is illuminated by dozens of fantastic health policy blog posts each fortnight. It can only be, therefore, that the main goal of purported “health reformers” is to serve as the functional equivalent of a jobs bill for health policy bloggers.

And so again we answer the call, this time with renewed spirit and vigor. For spring has sprung, even in New England (finally). Mud season is now upon us. Why not do as the pols do? Grab a handful and fling some, in the name of health reform!

Welcome to Health Wonk Review. This edition brought to you by Don Taylor, Aaron Carroll, and Austin Frakt of The Incidental Economist.

Glenn Laffel praises the release by the NIH of new diagnostic criteria for Alzheimer’s Disease. The main twist of the new guidelines is the addition of two stages prior to the ‘full blown’ dementia stage: pre-clinical AD, and mild impairment.  While glad for the innovation, Laffel wonders about the 30 year gap since the last update, but notes ‘better late than never’.

Chris Langston of at The John A. Hartford Foundation blog laments “that there is special expertise needed for geriatric care and that putting it to work effectively requires deploying a better trained workforce in new and different ways— does not seem to be at the top of any one’s mind” in considering health reform proposals.

In Are decision support tools turning doctors into idiots? posted at Health Business Blog, David Williams lauds the benefits of decision support tools but warns that some patients are irritated when physicians use them. He quotes a study author, “It gives patients the feeling that they just paid a $25 copay to have someone Google something for them.”

Jan Siderov of The Disease Management Care Blog is not impressed with CMS’s Physician Quality Reporting Initiative (PQRI). Participating physicians are being paid almost $2000 each to report quality measures to CMS. It is not at all evident to Dr. Sidorov that taxpayers are getting their money’s worth.

Currently, some physicians receiving Medicare reimbursement “upcode” the procedures they perform to make them seem more intensive then they actually are to increase their own reimbursement. The Healthcare Economist weighs in on how Rep. Ryan’s budget proposal might (or rather might not) affect that practice.

Over at Health Affairs Blog, Leighton Ku considers the remarkable history of the Medicaid program, long controversial and even reviled in some quarters, yet today covering nearly 70 Million Americans, while facing intense scrutiny due to the Rep. Ryan budget proposal to move the program’s funding to a block grant model. Ku provides a clear description of who the program covers, and places this all into the context of the federal budget discussion and looming need to increase the debt ceiling.

At The Road to Health, Doug Peridnia takes issue with Paul Krugman’s column Patients Are Not Consumers.

Maggie Mahar of Health Beat explains that regardless of what rhetoric you hear out of Washington, insurers, hospitals, drug makers and device makers realize that it would be reckless to assume that the health reform legislation will be repealed; their competitors already are preparing for change. She contends that market-watchers say that in the medical marketplace, reform is becoming a reality as the health care industry implements fundamental changes in insurance coverage, access, payment, and how health care is delivered.

Daniel Fox and David Kindig argue over at Improving Population Health that contradictions exist in how the draft rules for ACOs address population health. Specifically, “[t]he rules recognize that health has multiple determinants, but they make stronger demands for engaging in clinical prevention than for addressing these multiple determinants.” In their post, they give examples of the contradictions and suggest ways to address them.

Although states refusing to move forward with health exchanges get the most press, Linda Leu details proceedings from California, one of the states that is moving forward, at Health Access WeBlog.

Louise blogging at healthinsurancecolorado.net reports on the passage by the Colorado legislature of a bill requiring insurers to offer ‘child only’ insurance policies. The law requires not only the selling of such policies, but the creation of open-enrollment periods during which children could apply for coverage.

Over at Workers’ Comp Insider, Julie Ferguson writes about the National Council on Compensation Insurance’s Annual Issues Report, arguing that the climate for workers comp and the occupational health arena is precarious.

Avik Roy of Forbes puzzles over the difference between health care cost growth in the U.S. vs. the U.K. Why is the latter greater than the former?

Writing about his manuscript in Health Affairs, John Goodman blogs about his no-fault alternative to our current malpractice system.

Heather Kelley writing at the  INQRI Blog, reviews some of the most recent efforts to alter the models under which nurses practice with a goal of improving patient quality (Nurse Staffing – Different Models, Different Results). Better support, and more focused nurse-patient time are linked with better outcomes across a variety of settings.

Finally, Austin Frakt of The Incidental Economist reminds us with the following graph that health literacy is quite low, especially for those on Medicare or Medicaid. 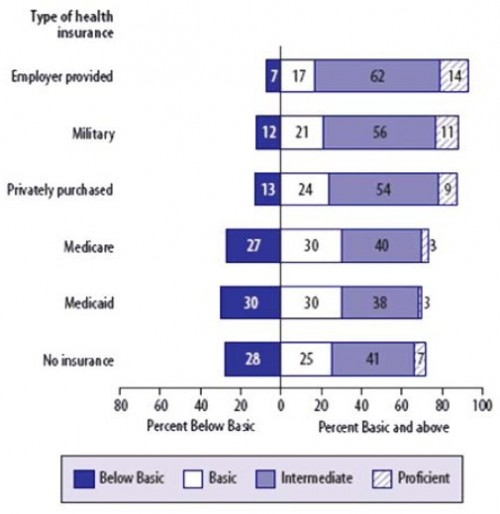