With the Affordable Care Act seemingly off to a good start in its first year, increasing access to insurance coverage for adults, attention is likely to turn to an older program for children that will come to an end in 2015 if it is not reauthorized: the Children’s Health Insurance Program, or CHIP.

This program has made a huge difference in insurance coverage for children, so much so that they are not, and did not need to be, the primary beneficiaries of the A.C.A. But that does not mean that children are not a concern. A variety of factors about our national strategy for children’s health care, or our lack of one, leaves them particularly vulnerable to challenges in access and quality in the next few years.

Children have not always fared so well. From 1980 through 1984, the rates of uninsured children and non-elderly adults were almost identical. Since that time, they have diverged significantly, so that in 2012, about 15 percentage points separated the two.

This turn of events was achieved though expansions of public coverage, specifically Medicaid, in the 1984 Deficit Reduction Act, and the Children’s Health Insurance Program, in the 1997 Balanced Budget Act. In 2013, more than 41 percent of children were insured through a government program, making them more dependent on public coverage than any group except seniors.

When the Affordable Care Act was passed, Congress also reauthorized the CHIP program. As a recent Health Affairs review reports, this was done “out of an abundance of caution.” CHIP is now funded through fiscal year 2015. If it is allowed to expire after that, in some respects it might not be a calamity: Most of the children insured through CHIP would qualify for plans offered in the health insurance exchanges.

There are still many reasons to be concerned about the end of CHIP, though. CHIP plans have an actuarial value of greater than 90 percent, making them much more generous than A.C.A. silver benchmark plans, with an actuarial value of 70 percent, meaning the plan covers 70 percent of health care costs. The increased cost-sharing families might encounter by moving to private plans might leave even more children underinsured. Deductibles, co-pays, coinsurance and even premiums are usually much lower in CHIP plans than in exchange plans. 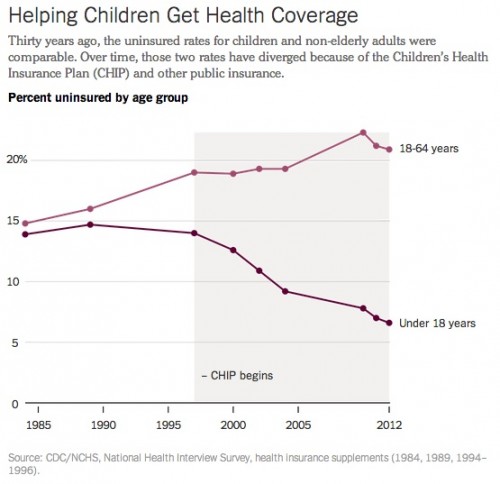 There’s also the “family glitch” to consider. The Affordable Care Act is written so that individuals who are offered adequate insurance through their jobs are not eligible for subsidies if they choose instead to buy plans from the exchanges. This is true even if the individual’s employer offers coverage only for the employee and not for the employee’s family. In that case, employees who want a family plan, or a plan for their child, must pay the full exchange price.

That could leave a significant number of children completely uninsured without the continuation of the CHIP program. Even those insured could face difficulties because of narrow networks that are part of many private exchange plans. There are fewer options for pediatric providers than adult ones, especially when it comes to specialty care, so if plans do not include children’s hospitals and networks, children can potentially be left without access to high-quality care.

Other problems exist for children beyond transitioning many of them from public to private coverage. The biggest of them lies in the way that the A.C.A. defines essential benefits. Although the A.C.A. recognizes that dental and vision care are important for children, and defines them as essential benefits even when it doesn’t do so for adults, regulations ask only that dental carebe available as part of a plan, or as a stand-alone plan; people aren’t required to buy plans containing that coverage. Because of the increased cost for these benefits, it’s still possible that many kids won’t get them.

Another issue is in how essential benefits are put into practice in plans. The department of Health and Human Services decided not to define them as a national standard, letting states define benchmarks themselves.

All of these services are necessary for children with these issues to be given a chance at a normal, healthy life. And although annual and lifetime limits to coverage were banned by the law, individual limits can be placed on services covered in a year.

Part of the problem is that many assume that children are just “little adults.” This is far from the truth. Because children are growing, services aimed at fixing developmental delays and problems that might seem nonmedical to adults are essential in making sure that kids advance. Some treatments that are not curative are still needed in order to help children develop well and learn to live with disabilities. Failing to meet the social and behavioral needs of children can have lifelong effects.

There are a number of decisions to be made about children’s health in the next year. Without proper attention, we could lose many of the gains made in the last few decades with respect to children’s health insurance coverage. Without action, even those who are insured may not get the care they need. Children were not the primary beneficiaries of the Affordable Care Act, as they were already reasonably well insured, but that doesn’t mean they don’t still need our attention.