Has the Affordable Care Act increased competition in the individual market?

Josh Fangmeier is a health policy analyst based in Ann Arbor, Michigan. He occasionally tweets at @joshfangmeier.

A basic premise of the Affordable Care Act (ACA) is that greater competition among insurers in regional, individual (non-group) markets would provide better options and value to consumers. So, it’s worth asking, to what extent did competition change in those markets when the key ACA provisions were implemented in 2014?

The ACA introduced several major reforms to the individual health insurance market in 2014, including launching the online marketplaces, requiring insurers to guarantee issue, and establishing sets of essential health benefits for all plans.1 What was the aggregate impact of these changes on competition?

Using federal data, I calculated the market share of each insurer in each state’s individual market, combining enrollment on and off the health insurance marketplaces in 2013 and 2014. In 2013, the largest insurer held over half of individual market enrollment in 28 states and the District of Columbia. (See Figure 1, the data for which is here.) In Vermont and Rhode Island, the largest insurer had over 90 percent market share. 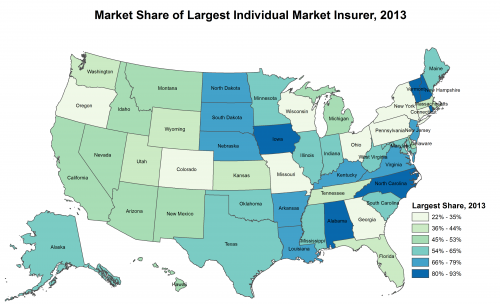 In 2014, about 6.7 million people enrolled in coverage through the marketplaces, and total individual market enrollment (on and off the marketplaces) grew from 10.6 million to 15.6 million, according to the Kaiser Family Foundation. However, this growth was uneven as states like New York (141 percent) grew much more than other states like Ohio (15 percent). Depending on which insurers in each state gained new members, individual market competition either increased or decreased under the ACA.

To calculate changes in competition, I compared the Herfindahl-Hirschman Index (HHI) of each state’s individual market in 2013 and 2014. The HHI is a standard measure of competition within an industry and is calculated from adding up the squares of each insurer’s market share. Smaller HHI values indicate more competition, while larger values indicate more market concentration. The HHI is admittedly not a perfect measure of competiveness, as it does not account for how much firms strive to meet consumer demands, but there are few accessible alternatives.

From 2013 to 2014, individual market competition increased in 20 states. (See Figure 2, the data for which is here.) For example, in Iowa, the HHI decreased as the state’s largest insurer, Wellmark, lost market share. This is likely due to Wellmark’s decision to stay out of offering coverage on the health insurance marketplace for the first three years. In the other 30 states and the District of Columbia, individual market competition decreased. For example, in Illinois, the largest insurer, Blue Cross Blue Shield of Illinois, grew its market share from 65 to 81 percent. 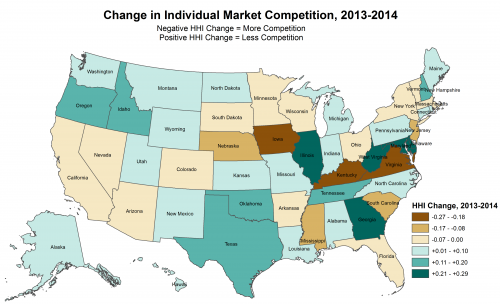 The increase in competition in less than half of states under the ACA is a surprising outcome, since the law lowered certain barriers to entry. For instance, it decreased marketing costs by selling plans through the marketplaces and cushioned plans against adverse selection. However, the closure of more than half of the ACA co-op plans demonstrates the challenges for new insurers to enter these markets.

The degree to which individual market competition helps consumers is still unclear. On average consumers have five carriers to choose from in the marketplaces, and more choice of insurers in the marketplaces is associated with lower premiums. Also, four out of five enrollees are satisfied with their marketplace coverage. It may be possible that consumers are choosing more established insurers due to brand recognition, quality plan offerings, or favorable rates due to leverage with providers.

Competition in individual markets is likely to change going forward. With this year’s proposed mergers among some of the largest national insurers, much attention has been paid to how these mergers could affect consumers and providers and how they may reduce competition across states. Whatever their source, changes in competition are worth monitoring2 as the individual markets continue to mature under the ACA reforms.

[1] While the ACA created national standards for individual market coverage, not all state insurance markets made the same transition in 2014. Prior to ACA reforms, six states already had some form of guarantee issue requirements and another four states had designated their local Blue Cross Blue Shield carrier as the insurer of last resort.

[2] The most common source of this information comes from insurer filings with regulators. Updated data for the 2015 calendar year will likely not be available until mid to late 2016.